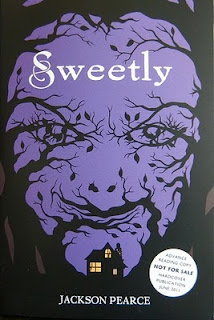 Jackson Pearce revealed the cover of Sweetly just last week and I can't stop thinking about it. Here is the synopsis:

Twelve years ago, Gretchen, her twin sister, and her brother went looking for a witch in the forest. They found something. Maybe it was a witch, maybe a monster, they aren’t sure—they were running too fast to tell. Either way, Gretchen’s twin sister was never seen again.

Years later, after being thrown out of their house, Gretchen and Ansel find themselves in Live Oak, South Carolina, a place on the verge of becoming a ghost town. They move in with Sophia Kelly, a young and beautiful chocolatier owner who opens not only her home, but her heart to Gretchen and Ansel.

Yet the witch isn’t gone—it’s here, lurking in the forests of Live Oak, preying on Live Oak girls every year after Sophia Kelly’s infamous chocolate festival. But Gretchen is determined to stop running from witches in the forest, and start fighting back. Alongside Samuel Reynolds, a boy as quick with a gun as he is a sarcastic remark, Gretchen digs deeper into the mystery of not only what the witch is, but how it chooses its victims. Yet the further she investigates, the more she finds herself wondering who the real monster is, and if love can be as deadly as it is beautiful.
Samuel Reynolds? Hmmmm, any relation to Silas?
I love retelling of fairy tales and fractured fairy tales. Hansel and Gretel is such a dark and twisted story. Who doesn't love a cannibalistic witch? Jackson't Sisters Red is so amazing - no doubt she will out do herself again with Sweetly. I am bummed to look and see a 3.82 rating for SR on Good Reads. Anything you guys can do to change that?
Check out Jackson Pearce HERE
Happy Reading!
at Wednesday, November 03, 2010