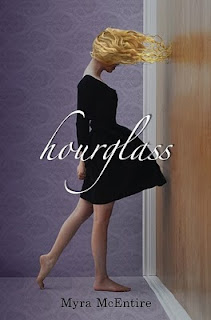 Hourglass by Myra McEntire
May 24th 2011 by EgmontUSA

Since the age of fourteen, Emerson Cole has seen strange things – dead things – swooning Southern Belles, soldiers, and other eerie apparitions of the past. She’s tried everything to get rid of the visions: medication, counseling, asylums. Nothing’s worked.

So when Emerson's well-meaning brother calls in yet another consultant from a mysterious organization called the Hourglass, Emerson’s willing to give it one last try.

Michael Weaver is no ordinary consultant. He's barely older than she is; he listens like no one she's ever met before; and he doesn't make her feel the least bit crazy. As Emerson ventures deeper into the world of the Hourglass, she begins to learn the truth about her past, her future--and her very life.

A seductive time-slip novel that merges the very best of the paranormal and science fiction genres, Myra McEntire’s Hourglass is a stunning debut from an author to watch.
Oh wow, I can honestly say that I love this! I think this has been one of my favorite cover reveals in a long time. My brain tries to make sense of what's going on with that girl on the wall. To me, the cover conveys that this girl's life is literally upside down. I"m blown away.
Sidenote: Hourglass comes out on my birthday so you know I have to read it!