Waiting on Wednesday - The Veil by Cory Putman Oakes 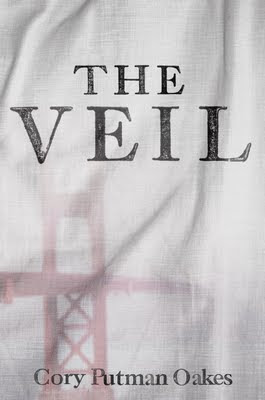 Seventeen-year-old Addison Russell is in for a shock when she discovers that she can see the invisible world of the Annorasi. Suddenly, nothing is as it appears to be—the house she lives in, the woman who raised her, even the most beautiful boy in town all turn out to be more than what they seem. And when this strange new world forces Addy to answer for a crime that was committed long ago, by parents she has never known, she has no choice but to trust Luc, the mysterious Annorasi who has been sent to protect her.

I had the pleasure to meet Cory over the interwebs last week and was happy to chat about her upcoming book, The Veil. She now lives in Austin, TX (#fistpup), and joins our awesome literary community! Here is what Cory has to say about the cover of The Veil:

It was created by David Brady, a friend of mine who is a very talented graphic designer. He based the design on a partial chapter of the book that I sent him. I was hoping that particular section would inspire the cover because it incorporates a lot of images which are very central to the book - the Golden Gate Bridge, for example (which, as you can see, is partially hidden by the fog). The Veil takes place in and around San Francisco (especially in the town of Novato, where I grew up) and the Golden Gate makes an appearance at several key moments of the story. David definitely "nailed it" with the cover art - I'm so proud to have this be the book's "calling card."
I love a good mystery, and this one sounds very intriguing!