Jennifer Lynn Barnes has a new book, Nobody, coming out January 22nd, 2013. The cover will be revealed here on August 16th along with other Texas bloggers. *tips hat* To get everyone ready for the reveal, I am thrilled to share the Prologue of Nobody and host an awesome giveaway!

Nobody by Jennifer Lynn Barnes Prologue

Nine letters. Two words. He refused to think of them as a name. With detached objectivity, his steady hands set the thin white paper, with its evenly spaced black lettering, to the side.

He’d done this before.

He’d do this again. More needles, more knives. More evenly spaced black letters that carved themselves, blood-red, into the recesses of his mind.

The only way you can make a difference in this world is to kill.

Add to Goodreads
You can find Barnes at her website
Come back August 16th for the Nobody cover reveal!
Click Read More to go to the giveaway... 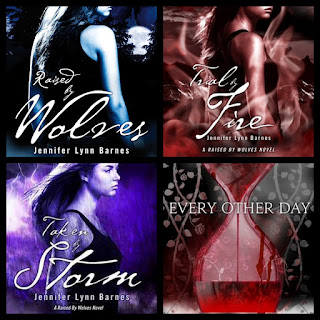 We just announced that Jennifer Lynn Barnes will be attending the Austin Teen Book Festival this year! Check them out on Facebook, Twitter, and their website! I am thrilled to run PR and Media for the fest - join us September 29th in Austin! The lineup is epic and you don't want to miss it!

Egmont has a mega awesome prize pack for one lucky US/CAN winner: all three Raised By Wolves  titles, a copy of Every Other Day, and an ARC of Nobody in a cute Egmont bag with tattoos! Fill out the fancy doo-hickey below to be officially entered. Good luck!
a Rafflecopter giveaway
at Friday, August 03, 2012