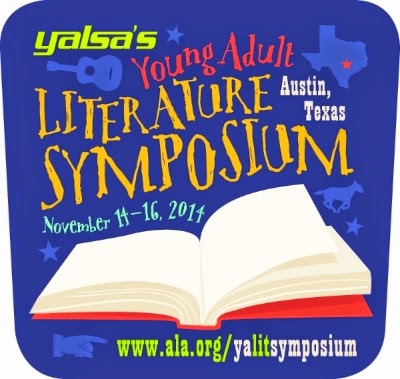 YALSA’s YA Lit Symposium will take place Nov. 14 – 16, 2014 in Austin, TX, at the Hyatt Regency. Come hang out with YALSA and 500 library workers, educators, researchers, authors and publishers to explore what’s ‘real’ in the world of teen literature! Highlights include a Book Blitz where attendees receive free, autographed books, and the chance to meet and mingle with over 50 YA authors at various receptions and sessions. Register online and view the preliminary program at www.ala.org/yalitsymposium. Registration discounts are available for students and members of the Texas Library Association and Texas Association of School Librarians.

I'll be there and maybe even serving a few cocktails on the boat cruise, lolz! Here is a highlight of some of the programs and authors!
YA Realness: what makes 'contemporary realism' feel true to readers?Award-winning authors known for their contemporary realistic YA fiction discuss their approaches to writing authentic stories, including the role of characters' race, culture, gender, sexuality, and economic status, and consider the question of whether realistic YA always invites controversy and censorship by including truths that make readers uncomfortable.

Whose Reality Gets Written?
The formula for YA fiction is no secret: Wrap a load of dysfunction in a layer of bleak despair and spice it up with little romantic angst. Problem is, that formula is a fantasy. Writers, editors, and readers are all making personal, particular choices. This panel will tackle these questions: Are certain realities over-represented? Are others under-represented? If so, why are some privileged while others are neglected? Does YA entail a different set of responsibilities than "adult" fiction? Who defines those responsibilities? Does narrow focus on a particular "here and now" doom books to irrelevance or rapid obsolescence?

Keeping it Really WEIRD (books for the fringe & reluctant readers)
Not all YA readers march to the same drummer. Some have a decidedly different point of view. This program will celebrate the diversity of all kids wonderfully weird and the books that keep them reading. By combining both fiction and nonfiction expertise, our session will cover all the freakish bases, from Roland Smith's CRYPTID HUNTERS to Kelly Milner Halls TALES OF THE CRYPTIDS and everything in between.