Giveaway + Deleted Scene: What We Left Behind by Robin Talley 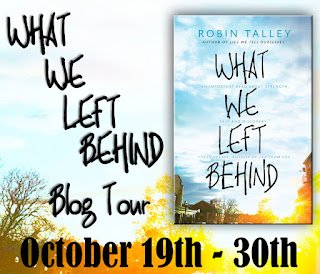 
An Exclusive Deleted Scene from What We Left Behind

The first chapter of What We Left Behind is very, very different from how I first wrote it. When I was revising my early drafts, I wound up changing where the story begins. As a result, I had to scrap this scene, which was too bad because I really liked it.

The deleted excerpt below was the original beginning to the story. In this scene the main characters, Toni and Gretchen, are shopping at Target the day before they leave for college ― when these two high school sweethearts will be separated for the first time.

The story alternates between both characters’ points of view. This scene is from Toni’s.

What did people wear in Massachusetts, anyway?

It was cold up there. Maybe I should just buy fleece.

But it was August. There was no fleece to be found in the Target men’s department.

I was about to give up and walk into the empty dressing room with two pairs of chinos when a saleswoman dodged in front of me, moving so fast it reminded me of the World Cup games my sister always watched. The saleswoman’s nametag said “Marjorie.”

“Can I help you?” Marjorie looked me up and down, eyes settling on my chest. “Miss?”

I should’ve walked away then and there. But something in me felt like fighting it this time.

“I want to try these on,” I said, holding up the pants.

Marjorie pointed to the other end of the store. “The women’s dressing room is that way.”

I knew that. I’d passed it when I’d first come in with my girlfriend, Gretchen. It had been packed with a group of middle schoolers shopping for bikinis for a Labor Day pool party. We’d heard them shouting about it from the baked goods aisle.

“Then I’m sorry, but you’ll have to wait. We have the rules for a reason, you know.”

There was no one in the men’s dressing room.

It was the middle of a weekday. No one except me was shopping for chinos. There was absolutely no one for me to disturb.

Except Marjorie. And The Rules.

My heart sped up. I might’ve kept going. Might’ve yelled at Marjorie. Might’ve even managed to get myself kicked out of the store.

But then I felt a hand on my arm, and my whole body relaxed. Gretchen was back.

“Don’t tell me you’re buying more clothes, T,” Gretchen said. “You have about eighty pairs of chinos already. Come on, I need your help or I’m never going to get through my list.”

I wrapped my free arm around Gretchen’s waist and kissed Gretchen with a loud smack. We both giggled.

I hung the pants I’d been holding on the nearest rack (which was definitely not where they were supposed to go, ha, take that, Marjorie). Then I took Gretchen’s shopping cart and steered it toward Health & Beauty. Gretchen handed me the shopping list, which was about a foot longer than my own had been.

“You know, they do have stores in New York,” I said as Gretchen reached over my head to grab four boxes of Tampax off a shelf on the Personal Care aisle. “You don’t have to turn your dorm room into your own personal CVS.”

“You are so funny, T,” Gretchen said. “Could you get me some shampoo?”

I found Gretchen’s brand (Burt’s Bees Super Shiny Grapefruit) on the next row and dropped two bottles into the cart.

“That’s because your ears just magically stay clean,” Gretchen sing-songed. “It’s one of the things I love most about you, schnookums.”

Gretchen turned around, face falling. And right away, I felt bad. I hated making Gretchen look like that.

“I know,” Gretchen said. “I’m going to miss you too. But remember what we said? No sad eyes today?”

“Yeah,” I said. I was pretty sure my eyes were still sad, though. “I remember.” 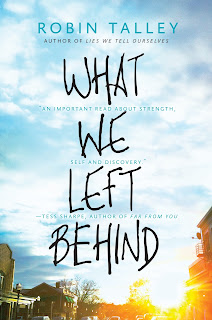 From the critically acclaimed author of Lies We Tell Ourselves comes an emotional, empowering story of what happens when love isn't enough to conquer all. Toni and Gretchen are the couple everyone envied in high school. They've been together forever. They never fight. They're deeply, hopelessly in love. When they separate for their first year at college—Toni to Harvard and Gretchen to NYU—they're sure they'll be fine. Where other long-distance relationships have fallen apart, their relationship will surely thrive. The reality of being apart, however, is a lot different than they expected. As Toni, who identifies as genderqueer, falls in with a group of transgender upperclassmen and immediately finds a sense of belonging that has always been missing, Gretchen struggles to remember who she is outside their relationship. While Toni worries that Gretchen, who is not trans, just won't understand what is going on, Gretchen begins to wonder where she fits in Toni's life. As distance and Toni's shifting gender identity begins to wear on their relationship, the couple must decide—have they grown apart for good, or is love enough to keep them together?

WIN WHAT WE LEFT BEHIND 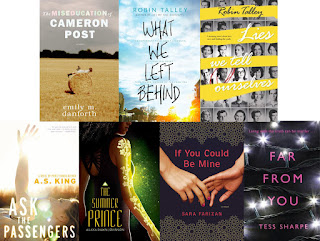 a Rafflecopter giveaway
at Monday, October 26, 2015