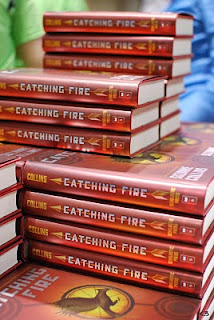 Not many days go by that I don't think about the day I met Suzanne Collins. It is safe to say that she doesn't feel the same way about meeting me. I am one of millions of readers that have followed her every move over the years. I will boast and say that I read the OVERLANDER series as they came out way before HUNGER GAMES was released. *pat self on back*

I have a bad habit of subscribing to magazines that I have no time read, and in September of 2008 I was flipping through Entertainment Weekly. I noticed a book review by Stephen King. I saw Suzanne Collin's name on the book and was excited she had a new release. Of course the article is fantastic (it wouldn't be a full-page if it wasn't), but these lines caught my attention:

"The love triangle is fairly standard teen-read stuff; what 16-year-old girl wouldn't like to have two interesting guys to choose from? The rest of The Hunger Games, however, is a violent, jarring speed-rap of a novel that generates nearly constant suspense and may also generate a fair amount of controversy. I couldn't stop reading, and once I got over the main character's name (Gale calls her Catnip — ugh), I got to like her a lot. And although ''young adult novel'' is a dumbbell term I put right up there with ''jumbo shrimp'' and ''airline food'' in the oxymoron sweepstakes, how many novels so categorized feature one character stung to death by monster wasps and another more or less eaten alive by mutant werewolves?"


That was all I needed to hear - I was hell bent on getting a copy of the book. Luckily for me, I am a chronic volunteer at my daughter's school library. I checked out a brand spankin' new copy of the HUNGER GAMES and read it in one day. We all know the rest of the story; I fell in love (again) with Suzanne Collins and eventually, so did the rest of the world. So here I am this morning just 4 days away from the release of MOCKINGJAY, the final installment in the HUNGER GAMES trilogy, thinking about the glorious day when I met Suzanne. I don't care who dies, and I don't care who Katniss ends up with (Team Gale). I just NEED this book in my hands!!! 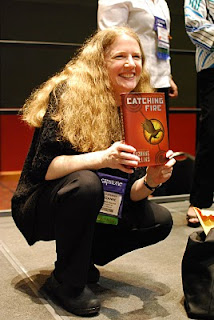 I was lucky enough to secure a front row seat for Suzanne’s author panel. In order to achieve this feat, I arrived over an hour early to the ballroom. Not surprisingly, I was not the first to arrive and claim a seat (or 5). Although the room was huge, every seat was filled within the hour. Suzanne took the stage quietly, setting her notes on the podium. A swarm of people (librarians, moms, children of all ages - both male and female) came to the stage for a quick picture. Suzanne was kind enough to grab a copy of the hunger games and pose on bended knee. The flashes were reminiscent of a red carpet event in Hollywood. She posed for roughly ten minutes; pointing to her gold mockingjay necklace and asking quick questions. One lady asked, “Do you feel like a rock star?” Suzanne answered, “Yes!” She stayed in position until a representative asked that we take a seat so Suzanne could begin her presentation. 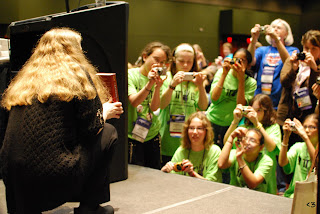 After a few kind words from a Texas Library Association Young Adult Roundtable committee member, Suzanne took the stage to hoots, hollers, and a huge round of applause. She was very humble, thanked her audience and began. Suzanne began with a slide show of her upbringing and her early career.
Suzanne began as a playwright then spent 19 years in children’s television. She has written for LITTLE BEAR, CLARISA EXPLAINS IT ALL, OSWALD, and THE MYSTERY FILES OF SHELBY WOO. During this time, she met James Proimos who basically talked her into trying her hand at writing books. Her first endeavor with publishing was THE OVERLAND CHRONICLES. This set of 5 books were always classified “first and foremost, a war story.” Themes deal with rescuing a POW, biological warfare, and finally the necessity of military intelligence of winning a war. At this point, Suzanne backtracks into her fascination with conflict and war.
Suzanne was a “military brat.” Her father was in the United States Air Force serving in Vietnam. At the age of twelve she realized that she thought of war more than the average teenage girl. For her 12th birthday, her family took her to the site of Napoleon’s defeat. She explains that it wasn’t the “true” site of his defeat, but chosen because of the massive hill. Today, a statue of a lion stands at the top of that hill. This hill is comprised entirely of soldier’s helmets and the surrounding soil. Suzanne goes on to share stories of her and her father’s talks of war. In 2003, just before our country entered war yet again, her father died. The first OVERLANDER book was published in the same year.
Years later, Suzanne was channel surging late at night. She was flipping back and forth between a reality television show where young people were completing for money and coverage of the war in Iraq. She explains, “…after a while, the lines began to blur.” This was the birth of THE HUNGER GAMES.
She laughingly said that in the beginning she thought of THE HUNGER GAMES as an. “….almost human cloning gone bad…”, and a comedy. The audience chuckled and she joined in. She goes on to explain that furthering the idea for THE HUNGER GAMES came in 3 parts; her father’s experience in the military, Greek mythology of Theseus, and Spartacus. Suzanne appreciated how ruthless the gladiators were. She explained that the OVERLANDER series covered Greek mythology so she turned to the gladiators. The ‘sport’ of watching men (usually slaves) compete for their life was fascinating.
Suzanne ended her discussion by reading the last few pages of CATCHING FIRE. The entire room was on the edge of her seat and perfectly silent. Most (not all believe it or not) knew how the story would end - in a “shameless cliffhanger”, but hearing Gale say, “There is no District 12” from THE Suzanne Collins was a dream come true.

Q and A: (paraphrasing)
I will preface by saying there was no moderator on the floor during this time. Almost all questions were asked by teenagers.

Where did you come up with the names for the characters in THE HUNGER GAMES series?
I wanted to pick traditional Roman names and add a little more to “jazz it up”. Rue is an acient flower that fit her agricultural district. Thresh was taken from the word threshing - a process before a harvest.

What was your favorite part to write in THE HUNGER GAMES?
Definitely the climax

What was your favorite book as a teenager?
LORD OF THE FLIES, 1984, and A WRINKLE IN TIME

If were a District, which one would we be in?
Definitely the Capitol! We know where our next meal is coming from and we are spoiled. We have free speech and much too privileged.

Where did you come up with the Mockingjay?
My dad used to whistle and birds would answer him back. I needed something the Capital forgot about and wasn’t paying attention to. (like Katniss)

Do you get recognized?
No, my children get recognized before me. People don’t come up to me at a café and say anything. “And I’m ok with that!”

Have you considered writing a prequel to THE HUNGER GAMES?
“I haven’t ruled it out”, but I am busy with editing for Mockingjay. There are definitely no plans right now.

When will THE HUNGER GAMES movie come out?
I have seen a few scripts pass by my desk and it still needs a lot of work. If everything goes to plan, they could possibly start filming in by the end of the year OR “it could all fall apart tomorrow.”

Which book is your favorite book?
(speaking @ HG), I look at each book as a 1-act play that make 1 tale. 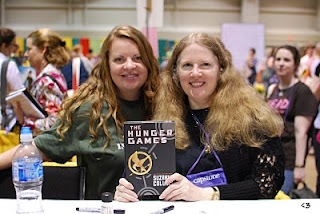 Entire EW article
Thanks to Stephanie Pellegrin who originally posted this on her blog when mine was dedicated for school work. ;)Go follow her now!

CONTEST TIME!
To celebrate my recent graduation from library school and the release of Mockingjay, I will be giving away a signed ARC of Linger by Maggie Stiefvater that I scored at TLA. You didn't really think I was going to give away my coveted copy of Hunger Games did you? Okay...just checking. 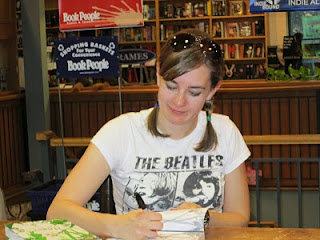