I stumbled upon The Marbury Lens at TLA (TX Library Association) in San Antonio this past April. It was my first library conference and I was overwhelmed with the amount of books I was receiving. At the end of two days I had almost 50 titles. Even though I was grateful for all the wonderful reads (still am), I was beginning to wonder if I was getting books that I would love. I took matters into my own hands. I walked up to the nearest publisher's booth and said, "I need a young adult book that is going to freak me out." Without hesitating, the representative smiled and said, "I have the perfect book." The lady wore a crooked smile and handed me The Marbury Lens. Just by looking at the cover art, I was hooked. I scored 94 books at TLA and The Marbury Lens was the FIRST book I read from my loot. Let's take a look at The Marbury Lens and meet author Andrew Smith. 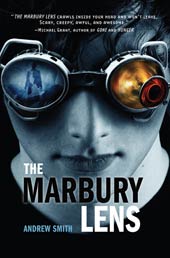 From the Publisher:
Sixteen-year-old Jack gets drunk and is in the wrong place at the wrong time. He is kidnapped. He escapes, narrowly. The only person he tells is his best friend, Conner. When they arrive in London as planned for summer break, a stranger hands Jack a pair of glasses. Through the lenses, he sees another world called Marbury.

There is war in Marbury. It is a desolate and murderous place where Jack is responsible for the survival of two younger boys. Conner is there, too. But he’s trying to kill them.

Meanwhile, Jack is falling in love with an English girl, and afraid he’s losing his mind.


Marbury Lens was created, in part, due to an experience you had as a young man. How much of Jack's story is really your story?

I can't help but write my own experiences into all my novels. I really don't think I could just make stuff up. Well, I could, but it wouldn't feel real to me. And I guess that's the big switch for me: I'll put down a novel if it doesn't feel real within the first 50 pages or so. And I don't mean "real" like it can't be historical or speculative or anything else. If that makes any sense. Have I successfully skirted that first question?

There is a wide variety of male relationships in Marbury Lens. Are any of these based on real relations?

Oh, I definitely had friends like Conner when I was a teenager. Over-the-top, unabashed kinds of kids that made you feel simultaneously protected and about to leap off a cliff. And the concept of brotherhood (like Ben and Griffin, for example) is something I explore recurring times in my books. I only have brothers in my family. The relationship between Ben and Griffin is much different than the brothers' relationship in In the Path of Falling Objects and Stick (which will be coming out next year). Both of those books have elements that were present in the way my brothers and I lived and got along with each other.


Jack and his best friend Conner go through some pretty harrowing times. Did you know their fate from the very beginning?

The short answer is yes. I write my books in my head, just thinking them out, for many months before I start putting the words down. I always know the big picture -- where the story will take my characters -- before I begin writing it. Sometimes, I like to fool myself into thinking there could be another resolution, but they always come back to where I'd imagined ahead of time.


Marbury Lens has explicitly violent scenes. How do you feel about those readers who think this story belongs in the hands of adults and not young adults?

The novel DOES belong in the hands of adults. But, there is no sub-group that should ever be excluded from reading it or any other novel, if that's what you're suggesting. It's hard for me to put a definite age rating on this novel. I'd say it's for 16 and above. But I've gotten a lot of mail from readers as young as 13 who've really loved the book, and who received the book from an adult who passed it along after reading it.


The cover art for ARC of Marbury Lens is amazing. How much influence did you have on the cover and is this also the hardcover art?

As you can see, the cover art for the hardcover is even more photographic, less high-contrast (it looks even better). Yes, the art is amazing, and the artist responsible -- Rich Deas, the creative director at Feiwel and Friends -- is an incredible talent. That said, I like to think that the influence I had on the cover was that I wrote a book that stuck inside and energized Rich's mind enough that he came up with this concept and couldn't help himself. And, actually, unlike other covers in the past, I never saw any concepts or drafts of the MARBURY cover along the way. One day, the cover simply appeared in my in-box. I think Rich worked on it in secret or something. But, like everyone who ever sees this cover, I was totally blown away by it. In fact, it's the only cover art that I actually had enlarged and framed. It's hanging in my living room, creepily enough.


Where did the idea of the toy wooden horse come from?

Without throwing in a spoiler here -- I couldn't stop it. One day, I started writing this novel -- an entirely separate novel about Seth (an important character in The Marbury Lens). I liked Seth and his story so much -- and I have this obsession with the time period and locale of his story -- it just felt natural to take his story and wrap it up inside of Jack's, which is also a recurring image in The Marbury Lens, the concept of things hidden inside of other things. So, the wooden horse (another brilliant artistic touch from Rich Deas) on the book's title page and on the inside jacket, is a kind of hidden message about something that happens near the end of the book.


After reading others reviews, I noticed that regardless of the ratings, people couldn't put the book down. Sounds like what people say about Stephen King. Thoughts?

I am very flattered by the comparison to Stephen King. I feel like the book is very visceral -- it makes you feel wiped out, drugged, alone, hung-over, nauseous, angry, sweaty, thirsty, scared -- but it sucks you in. It definitely had that effect (but much worse) on me when I was writing it. And yes, one thing I keep hearing, over and over, is how people read the book non-stop, how it messes with their personal lives because they can't look away from it -- just like what happens to Jack in Marbury, I guess. No matter what people think about the book -- whether they "get it" or not -- that is exactly what I wanted to do with this project. I wanted it to be something more than a reading experience. I wanted it to mess with people, like the Marbury lens messes with Jack.


You live in a rural area. How does that affect your writing?

I don't like noise and light. I love where I live. I raise horses, there's a lake out front, we can see every star in the sky at night, and we're 20 miles from the nearest traffic light or grocery store. It's a perfect place for me to write.

In 2011, Feiwel & Friends will be releasing my next novel, Stick. I'm very proud of this novel. It's beautiful, and I love it, and unlike my other "excavations into darkness" (that's a quote from Booklist's starred review of The Marbury Lens), this is a novel that is framed with a great sense of hope. I won't say that Stick doesn't have some pretty dark moments and face some difficult issues, though. Stick is a kind of post-modernist journey about a kid who is surrounded by the most awful ugliness you can imagine, but he still sees and hears the world with this tremendous sense of wonder and amazement. Also, the novel is written in a very "experimental" structure -- that's all I'll say without giving away any details about the plot or the structure. But I do really love this book, and working on it (we just finished the revision process a few weeks ago) was a refreshing break from Marbury. I recently whined to my editor that it feels like I've been stuck in Marbury for two years.

Ten years from now? Given my rate of production, I would probably be working on the edits for my fifteenth novel, with another seven or eight in the can and waiting to come out. I've been doing some script writing lately. I kind of like it. I'm not trying to offend anyone, but writing scripts feels like it only uses about one-third of the brain space that writing novels requires, so I may try my hand at cranking out a couple scripts here and there. Keep in mind that I never set out writing anything with the intent that "I will get this published." I just write. When I finish, then I decide what to do with it. Unlike most writers I know, I never get "hired" to do stuff that isn't already finished. I finish things first, then I put them away, or I send them to my agent or editor.

The only thing I know about right now: Opening week for Marbury, I'll be going to Mrs. Nelson's Bookshop in La Verne, California on November 11, and then flying up to San Francisco the next morning for an appearance at A Great Good Place for Books, in Oakland, on November 12. I would LOVE to come to Texas, though. There are so many great librarians, schools, and students there who have really supported my books and are such enthusiastic readers of my stuff. Plus, I understand they have good food in Texas, too.

You can pre-order Marbury Lens now through Amazon & Barnes & Noble.
Please visit Andrew at his BLOG

Andrew has been gracious enough to give me a SIGNED, brand spankin' new HARDCOVER copy of The Marbury Lens to giveaway to one lucky reader! *bows to Andrew*
Here are the details:

Contest is for US addresses only
Must be a follower
Contest ends at midnight - November 7th CST
Winner will be chosen using Random.org
Must fill out form below to be officially entered
Good luck!