The lovely Saundra Mitchell revealed the cover for her latest... 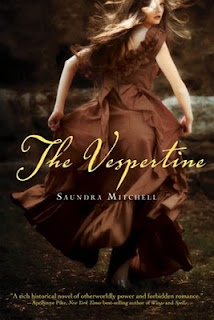 The Verspertine by Saundra Mitchell
Published March 7th 2011 by Houghton Mifflin Harcourt Children's .
From the Publisher:
The summer of 1889 is the one between childhood and womanhood for Amelia van den Broek—and thankfully, she’s not spending it at home in rural Maine. She’s been sent to Baltimore to stay with her stylish cousin, Zora, who will show her all the pleasures of city life and help her find a suitable man to marry.

With diversions ranging from archery in the park to dazzling balls and hints of forbidden romance, Victorian Baltimore is more exciting than Amelia imagined. But her gaiety is interrupted by disturbing, dreamlike visions she has only at sunset—visions that offer glimpses of the future. Soon, friends and strangers alike call on Amelia to hear her prophecies. Newly dubbed "Maine’s Own Mystic", Amelia is suddenly quite in demand.

However, her attraction to Nathaniel, an artist who is decidedly outside of Zora's circle, threatens the new life Amelia is building in Baltimore. This enigmatic young man is keeping secrets of his own—still, Amelia finds herself irrepressibly drawn to him. And while she has no trouble seeing the futures of others, she cannot predict whether Nathaniel will remain in hers.

When one of her darkest visions comes to pass, Amelia's world is thrown into chaos. And those around her begin to wonder if she’s not the seer of dark portents, but the cause.

Here is what Saundra has to say:
I couldn’t be more thrilled, honestly. I’ve been so lucky to get three fantastic covers for this book, and I can’t wait to see this one in print. A little birdie told me that there will be shiny, shiny foil on the title, and a secret neatness beneath the cover as well! 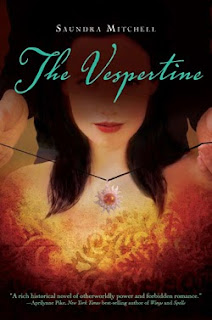 OLD Cover
What do you guys think? Personally, I think the new cover is beautiful! I love that dress! The old cover was nice, but I would choose the new one (if you forced me to).
You can visit Saundra HERE
at Monday, November 08, 2010