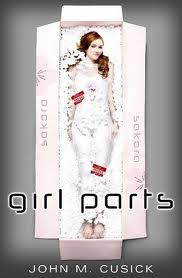 From the Publisher:
What happens when a robot designed to be a boy’s ideal “companion” develops a will of her own? A compulsively readable novel from a new talent.

David and Charlie are opposites. David has a million friends, online and off. Charlie is a soulful outsider, off the grid completely. But neither feels close to anybody. When David’s parents present him with a hot Companion bot designed to encourage healthy bonds and treat his “dissociative disorder,” he can’t get enough of luscious redheaded Rose — and he can’t get it soon. Companions come with strict intimacy protocols, and whenever he tries anything, David gets an electric shock. Parted from the boy she was built to love, Rose turns to Charlie, who finds he can open up, knowing Rose isn’t real. With Charlie’s help, the ideal “companion” is about to become her own best friend. In a stunning and hilarious debut, John Cusick takes rollicking aim at internet culture and our craving for meaningful connection in an uberconnected world.

So I knew the premise was a little...weird, which I usually go for, but this story didn't quite make the cut.

After the televised suicide of a girl at school, David's parents feel he is "disconnected" and worry that he has no real relationships. Instead of forming a relationship with their son, David's parents buy him a Companion; a fembot that was built especially for David. (His father works too hard and his mother is too fragile) Things are going fine until David grows impatient and wants to be more intimate with Rose (his fembot). After a failed strip tease at a house party (blech), David learns that Rose doesn't have any lady parts. That was blunt, but there you go. Here is where it gets ugly for me. David's reaction is that of a stereotypical teenage boy with a one track mind, and I wish Cusick would have chosen a different path. Regardless, David's response to Roses' lack of anatomy sends Rose into a tailspin. David tells Rose, "Why didn't you tell me? All this time! I mean, damn it, Rose! What was all this for?" He proceeds to tell Rose that she was a waste of his time and leaves her. At the party and forever.

The story shifts from three perspectives - David, Rose, and Charlie. Charlie is briefly introduced in the beginning of the story when he has a disastrous first date. This part is actually funny. Charlie's character is more developed when he encounters Rose as she is about to jump off a bridge and plummet to her death. She took the relationship a little hard for a fembot. Shifting from three perspectives didn't quite work for me. The transitions were rough, really rough at times, and Roses' voice was barely heard. I didn't have the opportunity to connect or have sympathy for Rose. She suddenly took on a much more human traits and was devastated when David left her. Rose in the last half of the book didn't work for me at all. The last 50 pages..... Oh, what do I say about the ending? I'll say, "Ugh, give me a break!" but you decide for yourself. Overall, really disappointed. Darn it, I had high hopes!

Upside: short read and a red head on the cover!