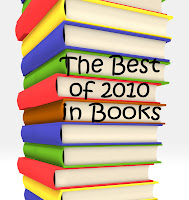 The Perpetual Page-Turner has created an end of the year survey. I thought I would give it a go... I have not linked up the titles because..... A) You have probably heard of most of them, B) I'm lazy today.

1. Best book of 2010? Starting out with the absolute best of 2010? Wow...uh....hmmmm. I would have to say Mockingjay by Suzanne Collins. Taking into account that it was the end of a trilogy and the whole universe was anxiously awaiting the release, this would be my best answer.  Whether you loved Mockingjay or not, can you imagine not reading it this year? Uh, no!


2. Worst book of 2010? A lot of people may have trouble answering this question, but reality is, not every published book is good. My answer? Without a doubt, hands down, Halo by Alexandra Adornetto. Oy! I literally clinch my teeth when I look back on this book.


3. Most Disappointing Book of 2010? The first one that comes to mind is Girl Parts by John M. Cusick. The book started out okay and then it got really...weird. Someone described is at the robot sex book. I think that is a great description! Close second...Clockwork Angel by Cassandra Clare. I gave it a good rating, not excellent, because I thought it was the middle grade version of The Mortal Instruments .


4. Most surprising (in a good way!) book of 2010? I can easily say Firelight by Sophie Jordan. I had just come down from my Halo experience and wasn't too sure about dragons, I mean...draki. The last dragon book I had read was Eragon - and I hated it! I didn't even finish it (one of the few). I was very apprehensive, but I loved Firelight and gave it 5 stars!


5. Book you recommended to people most in 2010? Probably The Hunger Games trilogy. Yes... definitely.


6. Best series you discovered in 2010? The Forest of Hands and Teeth by Carrie Ryan! I got the first two at TLA and read them back to back. I had never read a zombie YA before and I LOVED Carrie Ryan's version. LOVE! I am jumping out of my skin for The Dark Hollow Places. Close second...The Mortal Instruments series by Cassandra Clare.

7. Favorite new authors you discovered in 2010?  I will start with Heidi R. Kling. We went to high school together and when I learned, this year, that she was working on a YA book, I about fell out of my chair! She is so wonderfully talented and everyone should grab a copy of her debut Sea. Second, Sophie Jordan (Firelight), Kiersten White (Paranormalcy), and Ally Condie (Matched).


8. Most hilarious read of 2010? Two - Will Grayson, Will Grayson by John Green and David Leviathan and Anna and the French Kiss by Stephanie Perkins.


9. Most thrilling, unputdownable book in 2010?  Again, Mockingjay by Suzanne Collins. It seems like the entire country was waiting on the edge of their seat to get their hands on a copy. The publisher's were smart not to print galley's. We would have gone mental fighting over them! When I got my copy, I sat and read in 4 hours. I couldn't put it down...


10. Book you most anticipated in 2010? Again, Mockingjay. I was really looking forward to Matched too. I love dystopian's! Oh...and Beautiful Creatures!

12. Most memorable character in 2010? Cassel from White Cat by Holly Black! Oh man...cannot wait for Red Glove! Jack from The Marbury Lens is a close second. Wow....

14. Book that had the greatest impact on you in 2010? Okay, I admit it, I kind of shy away from really deep books. I read mostly for pleasure and I usually don't read super sad and thought provoking books. I need to work on this, I know! So my answer? Thirteen Reasons Why by Jay Asher even thought it wasn't published in 2010. Eeeek.

15. Book you can't believe you waited UNTIL 2010 to finally read? Crank by Ellen Hopkins. I have no clue what took me so long, but when I heard she was coming to Austin, I read it immediately. So powerful...I highly recommend!

1. New favorite book blog you discovered in 2010? I have more than one - Girls in the Stacks, Page Turner's, Good Golly Miss Holly, Stephanie, A History, The Story Siren, A Blog About Nothing, All About {n}, The Nerd's Wife, and Cari's Book Blog to name just a few. Really...there are so many of you!

2. Favorite review that you wrote in 2010? I think my review for Will Grayson, Will Grayson was pretty good. Also, Sweet, Hereafter by Angela Johnson. I put a lot of time and effort into the post.


3. Best discussion you had on your blog? I think my post about authenticity with Native American children's literature was pretty thought provoking for me and others. ;)


4. Most thought-provoking review or discussion you read on somebody else's blog? Tough question....I have read SO many fantastic reviews. In fact, the ones I have disagreed with were the most thought-provoking. Someone didn't care for Matched and I gave it 5 stars. Her reasons were valid although I disagreed. It was a well thought out review that touched on some great literary elements. Wish I remembered who that was....

5. Best event that you participated in (author signings, festivals, virtual events, memes, etc.)? Wow! There are so many! I think I would have to say TLA in April. I was in library school and this conference was my first "official" library thing. I was like a fish out of water and kept darting my eyes to everything! The exhibit hall was huge and they were literally handing out books as you walked by a booth. I was losing my mind with excitement! I can't wait until April, 2011 - TLA is in Austin this time around...


6. Best moment of book blogging in 2010? I would have to say being asked to moderate a panel at the Austin Teen Book Festival. I was at the grand opening of a library and ran into a local librarian. We chatted about TLA and then kablamo....she asked if I would volunteer! I was extremely excited and the day was awesome!

7. Best bookish discover (book related sites, book stores, etc.)? Hands down....ARC tours. I had no clue these existed! I have read some pretty awesome books through tours. I hope to get mine, Banned Book Tours, up and running by next week! ;)