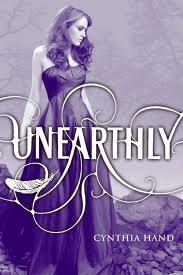 From the Publisher:
Clara Gardner has recently learned that she's part angel. Having angel blood run through her veins not only makes her smarter, stronger, and faster than humans (a word, she realizes, that no longer applies to her), but it means she has a purpose, something she was put on this earth to do. Figuring out what it is, though, isn't easy.

Her visions of a raging forest fire and an alluring stranger lead her to a new school in a new town. When she meets Christian, who turns out to be the boy of her dreams (literally), everything seems to fall into place--and out of place, at the same time. Because there's another guy, Tucker, who appeals to Clara's less angelic side.

As Clara tries to find her way in a world she no longer understands, she encounters unseen dangers and choices she never thought she'd have to make--between honesty and deciet, love and duty, good and evil. When the fire from her vision finally ignites, will Clara be ready to face her destiny?

Review:
Let me start by saying that Unearthly is a book about angels. Let me try again, Unearthly is a good book about angels. I have been burned by angel books before and swore I was done. I have been swooned by a pretty angel cover before, but I have heard nothing but fantastic things about Unearthly and knew I had to give this story a try. So happy I did!
Clara is an angel blood that is good at everything. Sports, languages, math, you name it, the girl knows it. She is content in California until she starts having visions of being in the woods and saving a boy from a forest fire. She knows, with the help of her angelic mother, that her purpose in life is to save this boy from his fiery death. Clara's family relocates to Wyoming and Clara focuses on finding the boy and how she is meant to save him. Insert boys - cute boys - boys in cowboy boots! She meets Christian, the boy she is to save from the fire, the first day of school, but the whole rescue bit gets shoved to the side when Tucker inserts the picture. Let me insert a "I Heart Tucker" fist pump into the review. He is stinkin' adorable! Tucker starts off like that annoying little boy in second grade that pulls your hair but secretly loves you. Yeah, that's him. Clara and Tucker don't get along in the beginning, but with the help of Tucker's sister Wendy (also her friend) things begin to change. For me, this is such a cozy and warm part of the story. I just love how Clara and Tucker's relationship evolves. I'll let you enjoy it so no more spoilers. Eventually, Clara must focus on her purpose and her reason for being.
Unearthly was a really fast read for me. The young voices and relationships were authentic. Christian and Tucker are adorable in their own ways. It was hard to root for one over the over. The storyline wasn't rushed or pushed and the ending took me for a loop. Storyline was predictable in all the right parts, but there are definitely a few twists and turns along the way. I was so happy that Clara was a strong and independent girl. Clara wasn't love sick in the first 50 pages of the book. (that is a HUGE pet peeve of mine and I think most YA reviewers) She was level headed and although she, at times, had a hard time juggling her responsibilities and wants, she did it.