I have been waiting for years for Anna to make her way to Texas and was SO happy to hear last year that she would be attending the Montgomery County Teen Book Festival at the beginning of 2011. After I read Bright Young Things, I had a few questions for Anna. 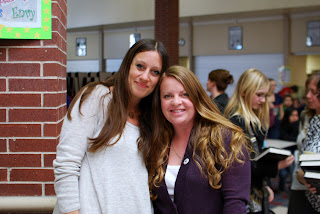 I am one of many readers that picked up your book, The Luxe, because of that gorgeous pink dress. Can you tell me anything about the casting or wardrobe choices for the Luxe series and Bright Young Things?
They’re beautiful, right?! Like most authors, I don’t have much control over what goes on the covers of the books, but I’m really lucky and pleased with what the art department folks did there. I did go the cover shoots, which were really fun—the girls aren’t ever exactly what I picture for the characters, but they all did great jobs of representing the idea of the characters. And who can argue with big heaps of dress? Which, by the way, is such a great metaphor for the world of THE LUXE—how all that beautiful ornamentation is also a big fat trap.

Was the concept of BYTs born because The Luxe series was coming to an end, or was it always swimming around somewhere?
More the latter. I wanted to do another series, and I wanted it to be new and different, but also to be a logical extension of the themes from THE LUXE. In a way, the 1920s follows the Gilded Age, but in another way it turns it on its head. And what American writer or reader doesn’t always have Gatsby in the back of their minds?

Cordelia and Letty pretty much throw caution to the wind and head for NYC in search of a new life (and more). Why 1929? Why NYC?
As with THE LUXE, BRIGHT YOUNG THINGS is set at the end of an era, although the characters don’t really know that their way of living (strict morality for the Gilded Age, anything goes giddy speculation for the Roaring 20s) is coming to an end. I’m really interested in that, in who is going to go down with the ship, and who is going to find a new way of being? And New York… New York because it is the center of everything. Though I probably just think that because New York is the city I moved to when I was eighteen. And like most writers, I have to start with what I know.

Letty learns quickly that it won't be easy becoming a star in New York. Without giving too much away, does Cordelia's "situation" help Letty rise to the top?
I don’t know yet! But I think the whole series will be about the tension and love between these two girls who were really all each other had in their small town life, and then when they arrive in this big wonderful, horrible city where all their dreams are supposed to come true, that bond really gets challenged. They have to learn not to need each other as much, and they begin to see differences that they just couldn’t acknowledge when they leaned on each so heavily back home. But, on the other hand, that kind of bond just never goes away.

The Grey's and Hale's have bad blood that goes back for years. Will we learn more about their falling out?
Oh yes. But that’s all I’m going to say!

Astrid comes off a little snobby (okay she is snobby), but deep down she has a big heart. Is she in for a huge roller coaster of a ride with Charlie?
I would say it already is a big roller coaster ride—doesn’t everyone know a couple like this, who are always either making out in public or on the verge of breaking up? But yes, I think as the kids get more involved in the business, the stakes for Astrid and Charlie are going to get awfully high.

How many times does the word 'cigarettes' appear in BYT? ;)
Ha! Many. Kids: Don’t smoke. For real. It’s funny—forgive my tangent here, but—I live in a pretty hip neighborhood here in Brooklyn—you know, the kind where tattooed graphic designers fill the coffee shops. And I see girls of all ages walking down the street briskly in high heels, cigarette in hand. And I distinctly remember being younger and watching girls like that and thinking, “Man, that looks cool.” And now all I can think is, “Man, that looks stupid.” When I write, I want to write about experience, the world as it is, the imperfections of my characters, their mistakes as well as their fears and their joys, and all of that without judgment. But here in the world, I am not above a little PSA!

We all want to know, any characters from the Luxe series make an appearance in the Bright Young Things series?
You know, I had considered an angle or two… but for the first book at least I was just so concerned with making BRIGHT YOUNG THINGS its own entity, so I didn’t really get too in depth with making Luxe connections. But now that you mention it… any requests or suggestions?!

Want to guess who has an extra signed copy of Bright Young Things left over from Mont Fest....? Yep, me and I would love for someone to enjoy it. Because I think this should go to a super-fan, this won't be a giveaway, but a contest. Below is how you can win a SIGNED hardcover of Bright Young Things. 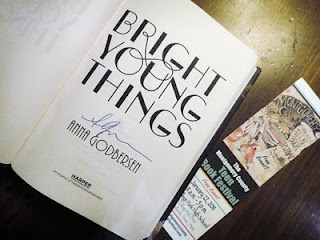 What character from The Luxe series would you like to see make an appearance in the Bright Young Things series? Describe the event or circumstance briefly in form. Answers more insightful than "Henry dates Astrid" will likely win. Think out of the box and have fun! I think Anna will have to help me choose a winner so take your time...

Contest Rules:
US address only
Must be a follower
Contest ends at midnight CST, Sunday, February 6th
Winner will be chosen by Anna and myself
Must fill out the form below to be officially entered
Extra entries will be considered in the event of a tie
Good luck!