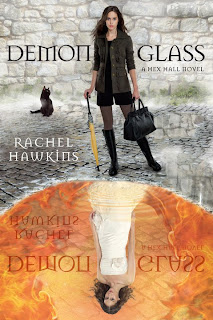 From the Publisher:
That was the whole reason she was sent to Hex Hall, a reform school for delinquent Prodigium (aka witches, shapeshifters, and fairies). But that was before she discovered the family secret, and that her hot crush, Archer Cross, is an agent for The Eye, a group bent on wiping Prodigium off the face of the earth.

Turns out, Sophie’s a demon, one of only two in the world—the other being her father. What’s worse, she has powers that threaten the lives of everyone she loves. Which is precisely why Sophie decides she must go to London for the Removal, a dangerous procedure that will destroy her powers.

But once Sophie arrives she makes a shocking discovery. Her new friends? They’re demons too. Meaning someone is raising them in secret with creepy plans to use their powers, and probably not for good. Meanwhile, The Eye is set on hunting Sophie down, and they’re using Archer to do it. But it’s not like she has feelings for him anymore. Does she?

Reivew:
Thanks to Lonestar Cynthia @ A Blog About Nothing...I got to read Demonglass last week. This story picks up right where Hex Hall leaves off. A little time has passed - weeks? - but Sophie is still on that creepy island/private school for bad Prodigium and she insists on going through the removal. She saw what Alice, a demon like herself, is capable of and she wants no part of it. Archer, the boy she has been pining over until he tried to kill her in the school basement, is on the run. He is part of The Eye, a group responsible for killing any Prodigium. So...that ain't good. Anyway, we are all caught up and this crazy stuff happens (from Sophie's pov):
Insert Dad
Watch me faint
Speech from Dad
Plane ride to England
Yay, my BFF Jenna and the janitor/healer Cal get to come!
Another speech from Dad
"Hello other demons that I didn't know existed....I'm Sophie!"
This place has a sick library, but you can't touch everything...
Family tree lesson from Dad - did he crack a smile?
A night out on the town
Oh awesome, everyone is trying to kill me.
Guess who shows up in a dark alley
Another speech from Dad
I see you, but you can't see me
I feel a change of heart coming on
Crater of....ghouls?
People are not who they appear to be
A sacrifice of epic proportions
This place has a dungeon?
Tears, fire, and a parting kiss....
So, there you have it..my not so conventional review. This was an excellent sequel! I really liked Hex Hall, and Demonglass has the same snarky speech that keeps this book a page turner.
4 Stars!
at Monday, February 07, 2011