Review - The End of the Line by Angela Cerrito 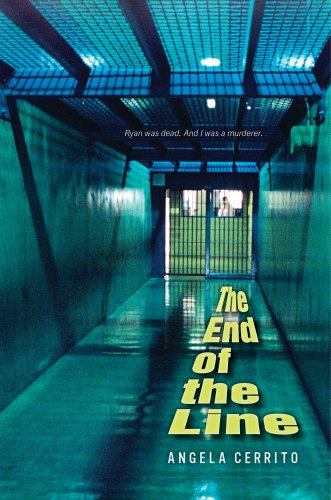 The End of the Line by Angela Cerrito
April 14th, 2011 by Holiday House

From the Publisher:
Gripping and suspenseful, this powerful, no-holds-barred novel by an exciting new talent goes deep inside a young boy's mind. Thirteen-year-old Robbie is locked in a room with nothing but a desk, a chair, a piece of paper, and a pencil. He's starving, but all they'll give him is water. He is sure he's in a nuthouse or a prison. Actually, he's at Great Oaks School, aka the End of the Line. Kept in solitary confinement, Robbie must earn points for food, a bed, even bathroom privileges. He must learn to listen carefully, to follow the rules, and to accept and admit the truth: he is a murderer. Robbie's first-person account of his struggles at the school—at times horrifying, at times hilarious—alternates with flashbacks to the events that led to his incarceration. Ultimately he must confront the question: which is worse—that he wanted to kill his friend Ryan or that he killed him by accident?

Review:
The book opens with Robbie sitting in a detention center/school for bad kids holding cell trying to compose a list of of who he is. Although the list, comprised of variations of his name, didn't go over well with Mr. Lester the "teacher", Robbie got it right the second time when he included, "I am a killer murderer." We are then taken back to the previous year when Robbie was starting the first day of sixth grade. This is the day he meets Ryan, a boy with more issues than a kid can handle. Ryan gives a terrible first impression by hiding under his desk, getting reprimanded by the principal, and following Robbie home. Robbie's mother invites him in and eventually to dinner. This is the first dinner in a long line of hot meals for Ryan. Good thing because we soon learn that Ryan's home life is less than ideal. Living with his elderly grandparents, Ryan is poor. Actually, destitute and impoverished is more like it. Ryan doesn't speak of his parents, but we know his situation isn't fortunate in any way. To the dismay of Robbie, his parents take Ryan under their wing, feeding him most nights of the week and letting him sleep over often. Soon, the boys begin to develop a friendship although quite strained. Robbie, and maybe Ryan, would argue that they were not friends at all. Robbie thinks Ryan is weird and impulsive, and Ryan thinks Robbie is spoiled and ungrateful. In a way, they are both dead on. (pun intended) The truth of that fateful day slowly but surely comes out as we flip from the boys sixth grade year to Robbie's current residence in Great Oaks School Prison.

*spoilerish*
I really enjoyed Robbie's lists throughout the story. The lists he composed were a fast way to get to know Robbie and what he really thought of himself and his situation. Yes, he wrote about superficial items he wanted, shoes and music, but he also shared his road to redemption in a list. His time in Great Oaks is no picnic. He is isolated for much of his visit, and he reflects a lot about his fateful sixth grade year.

Although I enjoyed his 'list therapy', when Robbie has to write one of places he's been, he writes about other schools that he was kicked out of. I was confused when the story didn't address these events in detail, but it all finally clicked when Robbie had to go through an exercise involving him being teased and taunted about being a murderer, a freak, and a jail-psycho boy. It's obvious now that Robbie was kicked out of the previous schools because he simply couldn't deal with others confronting him about the accident. I needed a little clarification, but it finally sunk in. Also, I would have liked to see more of Ryan's unfortunate situation. We learn only a little of his family. There is a touching scene at the end between Robbie and Ryan's grandfather. I wish that scene was drawn out a little longer and we would have learned more about Ryan's turmoil. I think getting to know Ryan a little better would help us connect to Robbie's story even more. In fact, I think a compilation novel from Ryan's perspective would be something I would read.
The mystery of the accident that led Robbie to the school for bad boys is what keeps the pages turning. The reader isn't even absolutely sure who the deceased is until the last 30 pages or so. Of course, we assumed all along who it would be considering the roller coaster friendship. Cerrito conveys a great moral lesson; life is full of choices. Young people need to understand that there are consequences to everything, even accidents. This story carries an important message and would be an excellent read for any young person.