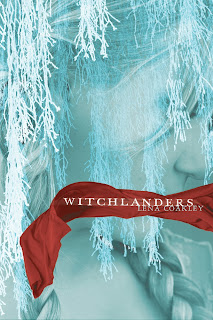 High in their mountain covens, red witches pray to the Goddess, protecting the Witchlands by throwing the bones and foretelling the future.

At least, that’s what Ryder thinks. He doubts the witches really deserve their tithes—one quarter of all the crops his village produces. And even if they can predict the future, what danger is there to foretell, now that his people’s old enemy, the Baen, has been defeated?

But when a terrifying new magic threatens both his village and the coven, Ryder must confront the beautiful and silent witch who holds all the secrets. Everything he’s ever believed about witches, the Baen, magic and about himself will change, when he discovers that the prophecies he’s always scorned—

I stumbled upon this via Twitter the other day and saved it up for my WoW this week. The ice blue and the red totally work. At first, I thought the side bit was icicles, but now I think it's part of a plant. Either way....I think it looks really interesting. I love the title too! I hope to find out more about this book and *crosses* fingers I nab a copy at some point...

After thinking about the art work, I decided to email Lena, and I asked her to tell me a little bit about the cover. Her is her response:

"I think the cover really captures the wintry strangeness of the book. Witchlanders takes place in a world covered in frost and snow. Although I have boy protagonists, witches (in my book usually blond and female) play an enormous part in both the world and the plot, so I think the girl Simon & Schuster chose for the cover is perfect. The witches wear red, and one witch in particular has taken a vow of silence, so the fact that the red sash covers her mouth takes on an ominous significance."
You can learn more about Lena on her website and find her on Twitter.

Sidenote: The book on Goodreads is still called The Witchlanders because we took out the “the” at the last minute. Why? Because the designer thought it looked better on the red sash! (And my editor and I agreed.)


Add Witchlanders on Goodreads
What do you guys think? Awesome, right?!
at Wednesday, March 02, 2011