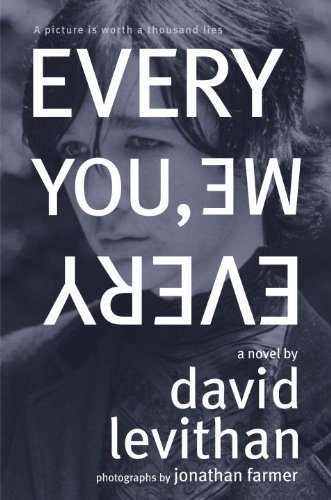 Every You, Every Me by David Levithan
September  13th, 201 by Knopf Books for Young Readers

In this high school-set psychological tale, a tormented teen named Evan starts to discover a series of unnerving photographs—some of which feature him. Someone is stalking him . . . messing with him . . . threatening him. Worse, ever since his best friend Ariel has been gone, he's been unable to sleep, spending night after night torturing himself for his role in her absence. And as crazy as it sounds, Evan's starting to believe it's Ariel that's behind all of this, punishing him. But the more Evan starts to unravel the mystery, the more his paranoia and insomnia amplify, and the more he starts to unravel himself. Creatively told with black-and-white photos interspersed between the text so the reader can see the photos that are so unnerving to Evan, Every You, Every Me is a one-of-a-kind departure from a one-of-a-kind author.
I am a big fan of Levithan. He made his way to Austin for the Will Grayson, Will Grayson tour with John Green, and that was literally one of the best author events I have been to. They were both hilarious! Although this one doesn't sound very funny, I am up for anything by Levithan. I recently read and reviewed Nick & Norah and also Love Is the Higher Law. He will be at TLA in two weeks and I am hoping to gosh they have an ARC of this book. Stay tuned.....