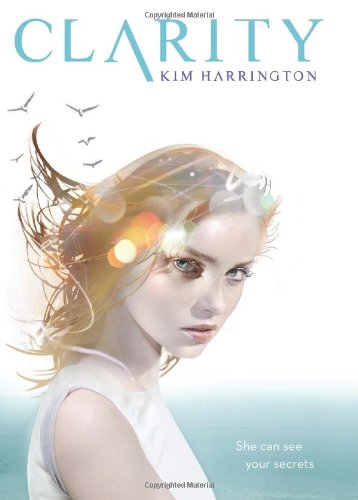 From the Publisher:
When you can see things others can't, where do you look for the truth?

This paranormal murder mystery will have teens reading on the edge of their seats.

Clarity "Clare" Fern sees things. Things no one else can see. Things like stolen kisses and long-buried secrets. All she has to do is touch a certain object, and the visions come to her. It's a gift.

When a teenage girl is found murdered, Clare's ex-boyfriend wants her to help solve the case--but Clare is still furious at the cheating jerk. Then Clare's brother--who has supernatural gifts of his own--becomes the prime suspect, and Clare can no longer look away. Teaming up with Gabriel, the smoldering son of the new detective, Clare must venture into the depths of fear, revenge, and lust in order to track the killer. But will her sight fail her just when she needs it most?

Review:
At 250 pages, this little book delivers quite a great mystery. Clare comes from a family of "gifted" individuals and with the help of her mother and brother, they run a family business giving readings to tourists who vacation in their little Cape Cod town. The family business brings the stares, whispers, and quite a few run ins with the local thugs. After the murder of an 18-year-old tourist, the town starts to panic and vacationers begin to leave. Clare's mother panics and begins to wonder how they will pay the bills come winter. When an NYC detective and his wanna be detective son move to town, the hunt for the killer is on. Eventually, Clare is asked to help locate the murderer using her ability to see past events by touching objects. The family needs the money and she is basically guilted in to helping. She soon learns that her brother was somehow involved with the victim, and she will go to any length to protect him.
The opening chapters of this story are exceptional. I was hooked at page one when we meet Clare with a gun pointed to her head. The story begins at the end, and over the course of 26 chapters, we go through the events that lead up to the frightening scene. Clare is not usually at the mercy of another. She is strong willed, opinionated (and often gets in trouble for it), and resilient. She isn't exactly praised for her gift and she often gets teased and taunted for being different - this kicks in the resilient bit. The one person that believes in her and accepts her for who she really is broke her heart. Justin, the ex, cheated on Clare with the Queen of Mean, Tiffany. I love the way Clare finds out about his tryst and the run ins she has with Tiffany! Whew, I'll save those for you to read.
When Gabriel, the detective's son, joins Clare in the investigation, she begins to forget all about Justin. Well, after they have a few yelling matches. Gabriel is one of those haters that doesn't believe in Gabriel's ability. He eventually changes his mind....kissing kinda does that to boys. The murder mystery isn't so easy to solve, and soon the bodies start racking up. We are introduced to several characters and in the end, it almost seems like the killer could be anyone. Action packed, unpredictable, and full of snarky scenes.....a must read.
4.5 Stars
Add to Goodreads
at Thursday, April 21, 2011