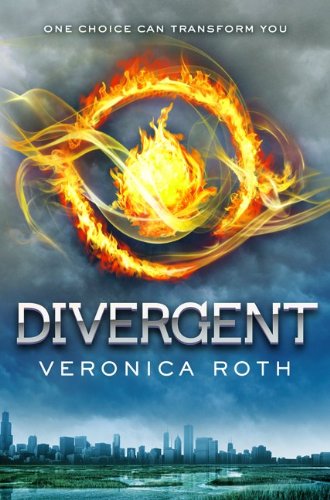 Divergent by Veronica Roth
May 3rd, 2011 by HarperTeen

From the Publisher:
In Beatrice Prior's dystopian Chicago, society is divided into five factions, each dedicated to the cultivation of a particular virtue—Candor (the honest), Abnegation (the selfless), Dauntless (the brave), Amity (the peaceful), and Erudite (the intelligent). On an appointed day of every year, all sixteen-year-olds must select the faction to which they will devote the rest of their lives. For Beatrice, the decision is between staying with her family and being who she really is—she can't have both. So she makes a choice that surprises everyone, including herself.


During the highly competitive initiation that follows, Beatrice renames herself Tris and struggles to determine who her friends really are—and where, exactly, a romance with a sometimes fascinating, sometimes infuriating boy fits into the life she's chosen. But Tris also has a secret, one she's kept hidden from everyone because she's been warned it can mean death. And as she discovers a growing conflict that threatens to unravel her seemingly perfect society, she also learns that her secret might help her save those she loves . . . or it might destroy her.

Review:
I am going to say what everyone else in the book world is saying about Divergent, it is AMAZING! Dystopian YA is my favorite genre and this baby is at the top of my fave list. You may be tired of hearing that Divergent ranks right up there with The Hunger Games, but it does! The crumbling world, the belief that the authorities have everyone's best interest at heart, and the small group of people that don't fall for the hype, are all presented to perfection. If I wrote my review minutes after finishing...I would only say this book is awesome over and over again. Now, I can say things like, "It melted my face off!" "I would marry this book if I could" and "If you didn't like this book, you are dead to me!" Check out this great interview from HarperTeen.

Because you have read endless positive reviews of Divergent, I will keep my review simple. If you only buy one book this month, buy Divergent! It is original - uh, factions anyone?, suspenseful - the ferris wheel scene made me want to puke, and the sexual tension is as thick as ______. (you fill in the blank, my Texas version has a naughty word in it plus the word pig). You get my point...you won't be disappointed.

I believe in this book and know it will bring hours of joy to those who read. So, I am giving away my review copy. I know, I know...I'm amazing, you can stop screaming. There are extra entries, so be sure to read each entry carefully and add up everything correctly. Enter only once - yes, I check!