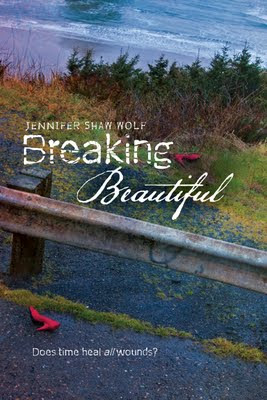 Allie lost everything the night her boyfriend, Trip, died in a tragic car accident—including her memory of the event. All she has left are the scars and a sneaking suspicion that the crash wasn’t an accident after all. When the police reopen the investigation, it quickly turns on Allie and her best friend, Blake, especially as their budding romance raises eyebrows around their small town. As the threats begin and the survivor’s guilt sets in, Allie’s memories collide with a dark secret about Trip she’s kept for too long. Caught somewhere between her past and her future, Allie knows she must tell the truth. Can she reach deep enough to remember that night so she can finally break free?

I'm happy to have Jennifer at the blog today to talk about her amazing cover story. Trust. You want to hear about that shot!

The process of getting that photo is actually a pretty awesome story! Wanna fill everyone in?
Okay, so here’s the story. My wonderful editor at Walker, Mary Kate Castellani, sent me a picture that she said was an idea they were working on for the cover. The picture was beautiful, but didn’t fit the setting of BREAKING BEAUTIFUL. She said they would be looking for something that worked better. Since my husband is an AMAZING photographer and we live near the northwest beaches where the story is set, I asked her if she would let us take a (literal) shot at it. She gave us the go ahead so we set off for the coast. Two trips and a run in with an UGLY RV later we had some shots for them to work with. They chose one, the art department at Walker/Bloomsbury worked their magic, and now I have a cover that I absolutely love and that features a photo taken by my husband, David Wolf.

Those red shoes on the cover are pretty hot. Are they yours, and will you sign them and put them up for a giveaway?
LOVE THE SHOES! Wish they were mine. I borrowed them from my friend Susan. We went to great lengths to try and keep them clean and dry during the shoot and Susan was very nice about the few water stains we came away with. BUT now that they’re famous ;) … I’m hoping Susan will let me buy them from her so I can take them on tour with me and/or use them for a giveaway. But first I need them for my book trailer.

Where is exactly was that photo taken?
Not sure I want to answer this one.

Let me explain…the setting for BREAKING BEAUTIFUL is a town on the coast of Washington called Pacific Cliffs. While many of the places in the book are real, Pacific Cliffs is fictional. The beach in the story is based on Ruby Beach which IMHO is one of the most beautiful places on earth. HOWEVER, (getting back to the photo), the art department specifically asked for a guardrail and we couldn’t find any road in that area with a guardrail that was close enough to see the ocean from the road or to get that it was the ocean.

So we went to Oregon.

Sorry. That’s one of the things that bothered me about the TWILIGHT movies, Forks and First Beach are absolutely beautiful locations, but many of those scenes were filmed in Oregon. I didn’t want to do that, but it ended up being necessary. Also we had to go to Oregon for a wedding anyway, so it was more convenient to take the picture there. The cover photo was taken from the road near Cannon Beach, Oregon, which is also an absolutely beautiful location. (How’s that for an overly-long explanation.)

Last week you put Breaking Beautiful out into the world for the first time, how long did you have to wait to reveal the cover?
How far back do you want to go? My book deal with Walker/Bloomsbury went through in November. The cover photo was taken at the end of March. I got the first cover comp featuring my husband’s picture by the middle of April, and I got the go ahead to show my cover last week (mid-June).

Besides your awesome photographer husband, who else has been your rock during the publishing process?

My sister, Kristin Amrine, (also a writer), has been on this ride with me from the beginning. My sister-in-law, author Angela Morrison has taught me more than I ever thought possible about the publishing industry, and then there’s my kids, my critique group, and my parents who all pushed me to follow my dreams.

Your book will release in a little less than a year from now. What will you do from now until then - besides edits?
I “hope” I’m nearly done with edits, although it’s great to go back and spend time with the characters I love. From now until next April when BREAKING BEAUTIFUL releases, I’ll keep writing, (totally excited about my current work in progress). AND this summer the red shoes, a group of fabulous teen actors, and I will head to the beach to start shooting the book trailer. I hope to have it ready for release by mid-January.

Thank you, Jennifer!
Thank you for the opportunity to share BREAKING BEAUTIFUL and it’s cover!

So, there you have it! An amazing story behind that photograph. I don't know of any other author that had a spouse work on the cover art. I wonder... Even though this one comes out in April of 2012, keep it on your radar and giant TBR pile. I'm excited to read it even more that I know a little about the back story. How many of you get more excited about a book when you know something personal about the author, story, or cover art?
Add to Goodreads
You can Jennifer at her website, blog, and on Twitter
at Tuesday, June 21, 2011