I just read that you worked at Chuck E. Cheese's. Please, oh please, fill us in!
My first job was, indeed, working for Chuck E. Cheese. I was, in fact, Chuck E. Cheese. My job was to dress up as a giant rat, go out to the game floor and walk through the pizza rooms and make kids happy. Which doesn't sound like a terrible job until you factor in the giant rat head that always smelled like sweaty feet, Texas in the summertime, screaming kids and noisy video games, and the fact that the animatronic lion ("The King") who sang Elvis songs was broken and never played anything but "Viva Las Vegas." Over. And Over. And Over.

And that was BEFORE some smart aleck kid figured out that Chuck E. was a girl and copped a feel. 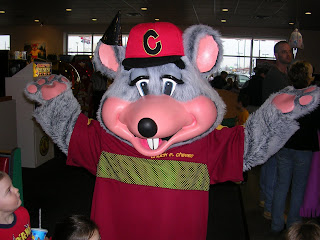 You and I are Texas pals and your latest book, TEXAS GOTHIC, is set in the Lonestar state. Did you always have this story set in Texas or did it evolve over time?
Oh, this book was set in Texas from its inception. In fact, the state's particular history is integral to the plot, which came about on a family vacation to the San Antonio area when I was in high school. My dad and I brainstormed out the details of the historical part of the mystery way back then. Some of the modern parts changed in the intervening time, but I actually started writing the first version of this in biology class.

It even had the same title: Texas Gothic. That's one of the few things that didn't change, actually. (It's a much better book than the unfinished first version, written on college ruled notebook paper and splashed with frog guts here and there.)
Amy and Phin come from a long line of witches and find themselves dealing with ghosts. Did you keep the lights on when you wrote the spooky parts?
The fact that I write in the middle of the night didn't help! There were times when the house was quiet and dark, and I'd be imagining some spooky part, and really psyching myself into Amy's state of mind while she's encountering these things--imagining the mysterious noises and the spectral apparitions, and the pounding of her heart and what that FEELS like--and yeah, I'd have to go and turn on some of the lights.

So, Ben is a pretty darn ka-ute cowboy! Did he come to you easily or was he challenging to write?
Amy and Ben are at cross purposes from the beginning, and even though SHE doesn't know why he's acting like such a jerk, I had to give glimpses of the likable guy he is so that WE know he must have some good reason for being upset with her and the chaos she's bringing into his life. (And I had to make sure it WAS a good reason!) I had to make him smart and kind of funny and rather chivalrous. Making him very handsome probably helped, too, but not as showing his true charm between arguments.

I had to make sure that even though he and Amy fight, they always fight fair. Despite the fact they don't get along (at first), they're both good people in an antagonistic situation. Will they work things out? Or will they fight all the way through?

I don't know about you, but the cover art to TXG is so sultry and sexy. How did you score such an awesome cover?
I was blessed by the book cover fairies on this one. I simply love everything about it. The spooky fog, the lights in her eye, the red hair... though I did have to go back in the second draft and give Amy redder hair. It was originally more blond, though the Goodnights do run toward red.

This is your 5th paranormal, how is TXG different that than the others?
I think Texas Gothic combines my favorite elements of all my books to date. It has the sassy humor of the Maggie Quinn: Girl vs. Evil series, the strong regional flavor of Highway to Hell (also a Texas set book), plus the spooky factor and romantic sensibility of The Splendor Falls.

As for what's different--this is the first time my heroine has had a sister, and that dynamic was really fun to play with. Also, Amy Goodnight isn't discovering the paranormal aspects of her world; she's grown up surrounded by spells and psychics and a mad scientist sister who was infamous in their school for blowing up the chemistry lab while trying to enchant the football team's jerseys for invulnerability.

Plus, the romance was terrific fun. Lots of friction and chemistry in this one. 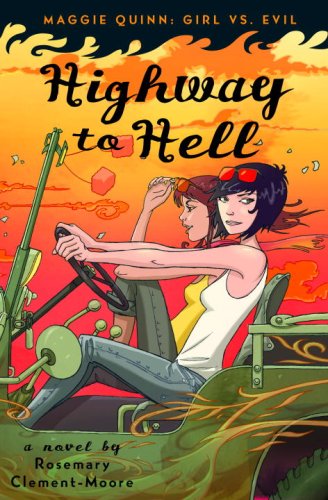 If one of your characters could make a cameo appearance in another story - which character and which story?
The world of The Splendor Falls is actually the same fictional universe as Texas Gothic. If I keep writing about Goodnights, there's a good chance they may someday meet Sylvie and Rhys from that book!

What's next for you?
I am writing a spin off of Texas Gothic, where one of the minor characters from that book takes center stage. I'm not saying a lot about it yet, but I can tell you it involves a psychic consultant for the FBI, a kidnapping, a magic-dabbling crime syndicate, a car chase, a museum heist and some serious arcane shenanigans.

And also probably some kissing. Because I like writing that part.

Any Texas tour stops this year?
So far I've got Arlington (Barnes and Noble at the Parks Mall) on July 16th at 1 pm, Barnes and Noble in Hurst (near Fort Worth) on August 6th at 2 pm, and Murder by the Book in Houstonon August 20th at 4:30pm. There may be more, and I'll announce them on my blog at readrosemary.blogspot.com and on Twitter at @rclementmoore. 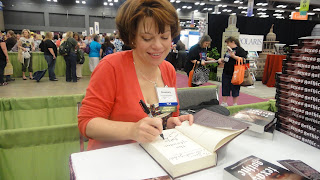 Thank you so much!
Thank you, Jen


Texas Gothic will be released July 12th, 2011 - get it!
Rosemary's Goodreads page where you can find and add all of her books.
You can find Rosemary at her website, blog, and Twitter.
at Monday, July 11, 2011