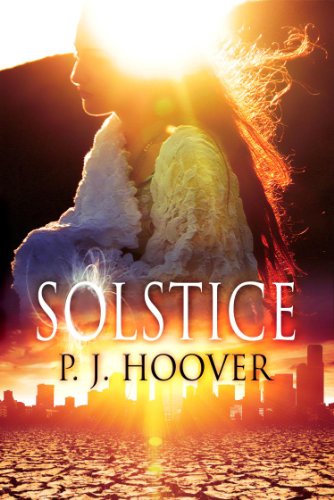 Synopsis:
Piper’s world is dying. Global warming kills every living thing on Earth, and each day brings hotter temperatures and heat bubbles which threaten to destroy humanity. Amid this Global Heating Crisis, Piper lives with her mother who suffocates her more than the chaotic climate. When her mother is called away to meet the father Piper has been running from her entire life, Piper seizes an opportunity for freedom.

But when Piper discovers a world of mythology she never knew existed, she realizes her world is not the only one in crisis. While Gods battle for control of the Underworld, Piper's life spirals into turmoil, and she struggles to find answers to secrets kept from her since birth. And though she’s drawn to her classmate Shayne, he may be more than he claims. Piper has to choose whom she can trust and how she can save the people she loves even if it means the end of everything she’s ever known.

Review:
This book is HOT, like slap your goat hot! I literally drank like 27 water bottles while reading this story. I was completely swept away into Piper's scorching world from the words "buy now with 1-click." The Global Heating Crisis is in full swing and there is a looming threat that at any moment every single thing on Earth will die. Piper lives in Austin, Texas *fistpump* and the city is under a giant heat bubble. Temperatures rise to 130+ and the town is in panic mode. Piper's mother sits on the city council and she is called away on "business." You know what they say, When mamma's away, the only child without a father figure will play! Within a matter of days someone ends up dead, the heat dome collapses, and Piper gets a tattoo then lands smack dab in the middle of a good ole fashion love triangle.
We can call this a retelling or a mashup, but regardless, this book is awesome! You've got your romance, mystery, suspense, and even mythology. What's not to love? Well, certainly not Piper's controlling mother, but hey....nothing is perfect. We have two smoking boys, Shayne and Reese, that are hot after Piper. I love that she isn't sure which one to choose and basically follows her heart whenever she is in the moment with each of them. She makes mistakes with each and the steamy moments make Piper more real and believable. I also love Piper's devotion to her best friend, Chloe. Without spoiling anything, those two go through thick and thin with each other and it nice to see two girls putting their friend first.
I'll be honest, I am not a mythology buff so the story of Hades and Persephone was completely new to me. Does Hades really have a three-headed dog? Not so sure. Because I haven't read the original I can't compare to Solstice. Does it make me want to read more about Hades and Persephone? Yes! Does is make me want to run out and rent the 1981 version of Clash of the Titans? Done.
4 Stars!

I am so happy to have P.J. on the blog today! I had some burning questions that I just had to ask. Ha! I am even more happy to call her a friend and fellow Lonestar. She is so supportive of her fellow writer buddies, and in this awesome group called the Texas Sweethearts & Scoundrels! Love them!

Hey, thanks for being here!
Thank you so much for inviting me for the interview! I’m thrilled to be here!

You and your agent decided to go the self-pub route with this story. I'm sure there are many pro's and con's and you have done both. What is one pleasant surprise that you have discovered along the self-pub way?
How quickly people have been able to have access to SOLSTICE! It was available as an ebook within two months of me deciding to go this route, and now it’s in the hands of readers. The ebook world is so immediate, and I adore knowing that people are already reading SOLSTICE and enjoying it.

Solstice is about a girl named Piper who lives in a dying world and finds herself in a mythological love triangle. So basically a hot dysrommyth. Which idea came first - the dystopian, romance, or mythology aspect?
*love* dysrommyth! Okay, for sure, the mythology came first. I wanted to write a retelling of the Hades and Persephone story (so romance was pretty inherent here also). But when I started exploring this, I decided that rather than a retelling, what I really wanted to write was a “what happens next.” This put the book in the future, and the dystopian element was born.

*You are a genius!

I read that this story isn't based on your favorite myth. What was about this particular story that made the cut?
The great thing about the Hades/Persephone story is the assumption that Persephone was carried off against her will but what if she wasn’t? This, combined with a psychotic mother, really made the Underworld story my top choice of myths I wanted to work with first.
*Psychotic mothers really do add something a little special to stories, and Piper's is a doozy!

Piper makes a choice that changes the course of people's lives early on in the story. Do you think she really had a choice or was it simply fate?
Great question! I do think Piper had a choice. I like to think of the Fates as these women who attempt to control everyone’s destiny. But every single action Piper makes can sway this destiny and make alternate versions of her reality exist. Sure, the odds are in favor of the preordained future occurring, but free will makes anything possible.

Solstice is available in ebook format and will be published in book form at a later date. Will that hot cover stay the same? Any other changes?
Yes, the hot cover will stay the same! (I have serious cover love. I think it captures all the subtle themes in SOLSTICE so nicely.) And thank you! There are no other changes in the print version.

I'm just going to assume that there will be a Solstice #2 (because I want one), will you stick to this mythological story or bring in another?
Thank you! And yay for SOLSTICE #2! I plan to stick to this cast of characters while also drawing on some other elements of mythology (at least for book 2). The nice thing about mythology is that so many bits and pieces can be dribbled in to really help make the story richer while creating wonderful opportunities for subplots.
There you have it! The hottest summer read out there. Literally!
Add to Goodreads
Buy it on Amazon
You can find PJ on her website, blog, Facebook, and Twitter.
Check out the book trailer for Solstice!
at Tuesday, August 02, 2011