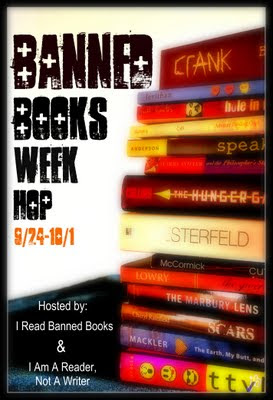 It is my pleasure to co-host the Banned Books Week Hop with Kathy from I Am A Reader, Not A Writer! I think my blog title says just a little bit about how I feel about the freedom to read, but in case it wasn't quite clear...I Read Banned Books. And, I support others that do as well!

I know, I know....there technically hasn't been a banned book in a very long time here in the US. We are fortunate to live in a place where the government doesn't not absolutely ban us from printing/distributing materials. We use the term "banned" in order to drive the point home - no one can tell me, and shouldn't tell anyone else, what to read. That is a decision I am capable of making, and believe others can as well. If we are talking about young adults - make an informed decision with your child and don't push your decision on others. Let stories be a gateway to deep and meaningful conversations about tough subjects. I have said no to my teenagers several times for their book choices. They weren't happy about it, but we talked about what elements of the story I wasn't ready for them to read about. Together, we made a choice that worked for our family.

If this is the only blog post you read about banned books, I want you to take a look at these sites:
Banned Book Week from ALA
Frequently challenged books are listed HERE
Two posts about recent examples of book challenges HERE

I will have more blog posts this week about banned and challenged books, but today...I know you all want to hop. So, let's get to it! THANK YOU TO Simon & Schuster, Shooting Stars Promotion, and the fabulous Charles Benoit!

Ellen Hopkins is a true champion of literacy! She herself has been banned from libraries and schools because her books speak the truth about teen drug use. Crank was the #4 challenged book of 2010.

David Inside Out by Lee Bantle
May 12th, 2009 from Henry Holt

Books with LBTQ themes are often at the top of the challenge list, and DIO is the story of a young man struggling to face his feelings in light of his friends coming out.

You by Charles Benoit
August 24th, 2010 from HarperTeen

YOU was challenged in Florida last year and is a very unique book that speaks to the consequences of ones actions and inaction. This book will shock you in a fantastic way!

There will be FOUR winners. First winner will win TANGO, second will win CRANK, third will win DAVID, and four will win YOU.