Welcome back for day #3 of my Adopt an Indie Month Giveaway!
If you missed Day #1, go HERE
If you missed Day #2, go HERE
This week I will offer chances to win some terrific Indie books. They range in age range and genre, but most are young adult. Please visit the Goodreads page and the author site to learn more about these titles. Feel free to comment below if you recognize one of these great books.

Find out more information about Adopt An Indie Month HERE and read one soon next! I am featured on this page, stop by and wave.

Experiencing episodes of déjà-vu, eleven year old Tom believes he is going mad. Then, he meets the adventurer Septimus Mason, who shows him that he is a "Walker" - someone who can transport himself to other times. Septimus explains that these abilities can be removed leaving him, once more, an ordinary schoolboy. Given the hurt these talents have caused, the choice would seem easy enough, but it is not so simple. In dreams, Tom has experienced life as other "Walkers" in times of mortal danger: Edward Dyson killed at the Battle of Isandlwana, 1879; Mary Brown who perished in the Great Fire of London, 1666; and finally Charlie Hawker, a sailor who was drowned on a U-boat in 1943.Agreeing to rescue them, Tom has three dangerous adventures before returning to the present day. Tom's finds he has drawn the attention of individuals who seek to bend history to their will. Soon Tom's family are obliterated from existence and Tom must make a choice between saving them and saving his entire world.

Add to Goodreads
You can visit Denning at his site

Following the tragic death of her parents, Eren Donovan moves to Spruce Knoll to live with an aunt she’s never met. Little does Eren know the entire town of Spruce Knoll is filled with “channelers”—a magical group of people who immigrated to the small Colorado town when they were driven out of their own lands.

Channelers are tied to the fate of the world. As the world slowly dies, so do they—and they alone have the power to stop the destruction of Earth. Soon, Eren learns she not only lives among them, but she is one. When she meets local boy Aiden, his charm convinces her that being a channeler may not be all bad though.

Add to Goodreads
You can visit McCorkle at her site 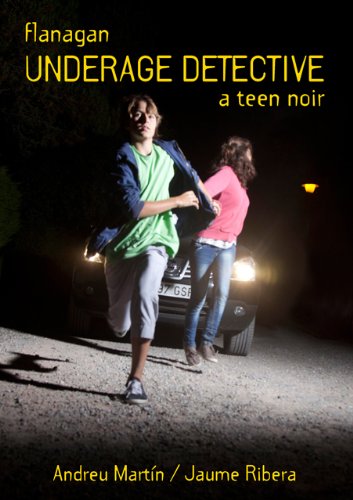 His name is Juan Anguera. He's a fourteen year old student, living in the turbulent environment of suburban Barcelona. But everybody calls him Flanagan, and he's an amateur detective. Big cases? Well, not really. He can find your lost pet, or maybe find out who's sending you those anonymous love poems. Until one of his simple cases turns out to be much more serious and dangerous. Flanagan finds himself doing the work of a real detective, all the while leaving behind his own childhood. And to make everything all the more complicated, he has to deal with his first experiences of heartache. His only weapons in the face of danger are his iron-clad sense of humor, his fast legs, and his clever mind.

Add to Goodreads
You can visit Ribera at his site


Giveaway #13
Ebook of The Quill Pen by Michelle Isenhoff

If you owned a pen that wrote the future, would you use it? What if the consequences spread like ripples in a pond? What if they raged out of control? What if the pen demanded tribute...in blood?

Thirteen-year-old Micah has found such a pen. One that’s ensnared him in a curse dating back generations. One that’s devastated two families and now threatens his whole New England village. But how can Micah destroy the pen when it offers him his only chance at the future he dreams of?

Add to Goodreads
You can visit Isenhoff at her site

Thank you for stopping by today!

Fill out the doo-hickey to be officially entered. First winner pulled will win the first ebook, the second will win #2, and so on...