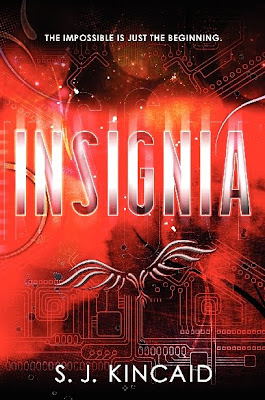 Insignia by S.J. Kincaid
July 10th, 2012 from Katherine Tegan Books
More than anything, Tom Raines wants to be important, though his shadowy life is anything but that. For years, Tom’s drifted from casino to casino with his unlucky gambler of a dad, gaming for their survival. Keeping a roof over their heads depends on a careful combination of skill, luck, con artistry, and staying invisible.

Then one day, Tom stops being invisible. Someone’s been watching his virtual-reality prowess, and he’s offered the incredible—a place at the Pentagonal Spire, an elite military academy. There, Tom’s instincts for combat will be put to the test, and if he passes, he’ll become a member of the Intrasolar Forces, helping to lead his country to victory in World War Three. Finally, he’ll be someone important: a superhuman war machine with the tech skills that every virtual-reality warrior dreams of. Life at the Spire holds everything that Tom’s always wanted—friends, the possibility of a girlfriend, and a life where his every action matters—but what will it cost him?

Well lookey what came over the interwebs today. I've been waiting for this book and got the heads up that the cover would be revealed today. Insignia sounds a little like Ender's Game - which I really liked. I'm really digging the male protagonist as well and I hope to get my hands on this one soon!
The cover was designed by the talented Sammy Yuen. He is the genius behind covers like Leviathan, Incarceron, Cryer's Cross, and Ellen Hopkins amazing books.