Guest Post: Meet Me On the Paisley Roof with Murray Tillman 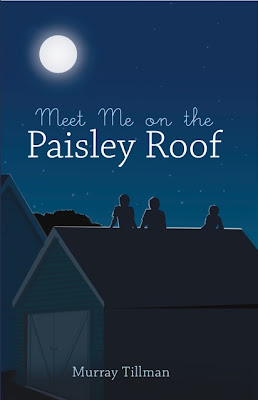 Trussell Jones has a problem. He is crazy in love with a beautiful girl named Ellen. The problem? He has no car. His stepmother, who believes that she is spiritually connected to Queen Victoria, won't let him drive. Furthermore, she is afraid Trussell is trying to kill her. Not to be overlooked is the fact that Trussell is being pursued by a gang of armed redneck motorcycle hoods, while his neighbors are preoccupied with changing visions of St. Francis. Just another heartwarming tale of a boy in love with a girl? Hardly.
This delightfully quixotic coming-of-age story, set in Columbus, Georgia in the 1950s, truly has something to shock and beguile even the most jaded reader. Its irreverent protagonist will take you on a road trip of hits, near misses, twists, and sudden turns that ll set you on your ear. You ll be unable to put the book down, until you reach its charming yet totally unpredictable conclusion.

During the final stages of completing my manuscript, in the late '90s, I began attending writers' conferences and workshops to find out about the publishing possibilities for fiction.  I found The Harriet Austin Writer's Conference, held annually in Athens, Georgia, where I live, to be an especially informative venue, attracting nationally recognized and locally known authors, agents, editors, and publishers.  Here's the message I came away with after several years of listening and interacting with presenters and participants.  (1) Get an agent.  You have virtually no chance of finding a publisher unless you have an agent.  (2) Getting an agent, unfortunately, is harder than finding a publisher.  Although their literary acumen may be close to that of the black-bellied whistling duck, agents know what will sell and the language of contracts.  (3) Women rule!  They write the books.  They buy the books.  So think feminine, guys!  (4) Don't talk about the quality of your manuscript.  Talk about the sales potential.  Develop a marketing plan.  Remember you are writing to make money, among other things.  If you don't know how to make money, find out.  (5) Have some plans in mind for your next book.  You are truly a gold mine of new books.  (6) Keep those query letters (a.k.a. clay pigeons) to agents, editors, and publishers flying.  Many agents, editors, and publishers see themselves as overworked heros who must do battle with the noisome masses of wannabe authors.  Amazingly, some don't even hide their contempt.  (7) Occasionally, you may find an agent or editor who will actually read part of your manuscript and even like it.  But, try again next year.  (8) Cherish those rare moments when someone of true merit, such as a Terry Kay, speaks.

By the mid 2000's I had given up on the mad merry-go-round described above.  And fortunately, by then, a new option, self-publishing, was beginning to stir.  The book that introduced this new world to me was The Fine Print of Self-Publishing by Mark Levine, who had also started a new company, Mill City Press.

After a careful search process, I decided to go with Mill City Press.  I selected the services I needed, paid for them, and ultimately retained all of the book royalties.  During this process, I interacted with a dozen or more individuals, each one of whom was cordial, competent, and helpful.  To facilitate this interaction, they provided an author coordinator to keep the ball rolling and an author website where tasks to be done were identified and tracked.  This was a first-class operation.

What are the chances of getting your work to the masses or making any money?  Slim.  But slim is better than none.

Add to Goodreads
Meet Me On the Paisley Roof online and on Facebook
Buy on Amazon and B&N
at Monday, December 12, 2011