Fifteen-year-old Stephen is a scavenger with his father after The Collapse. America is left in shambles and pickings are slim. After a terrible accident and a string of good luck (which isn't recognized right away), the two find themselves in a small village that has survived The Collapse. He has to learn to be social, be a part of a community, and learn to trust. Not everyone is worth trusting, but he finds friendship in the unlikeliest of places. When the secluded village is threatened, Stephen must decide where he fits in and what is worth fighting for.

Could not love Stephen even more! His voice and devotion to his father was the best part of the book. I'm not gonna lie, the cover and title led me to believe there would be zombies and vast descriptions of people dying and the world crumbling. My disappointment was short-lived after I met Stephen. I didn't need no stinkin' zombies! I has content with watching him break out of his shell, learn to trust, and be the hero I wanted him to be. Strong plot driven read with diverse characters. Fantastic book! 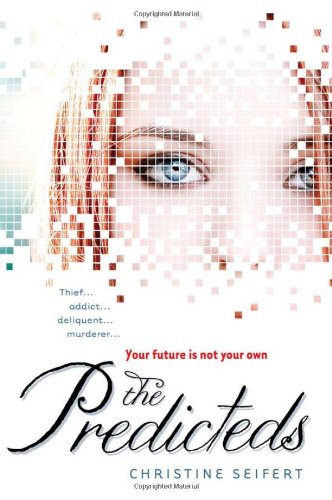 The Predicteds by Christine Seifert
September 1st, 2011 from Sourcefire

Can a person's entire life, including actions and thoughts, be predicted based on DNA? In this book, they can - fascinating! After a Columbine type situation, Daphne's high school tests everyone to see if they are "Predicted." This would allow school administrators to weed out the bad kids who are more than likely going to commit crimes or just generally turn into a troublemaker on down the road. Everyone is tense and tries to guess who these students are. You can imagine all of the insults and jabs that are thrown. After a brutal attack on a student, the school separates the predicted kids from everyone else and tensions flare. Who would commit such a heinous act? Why, a Predicted, of course! Or maybe not....

I was expecting more of a scientific, futuristic feel. For me, this is a contemporary set in the near future. Everything else is the same as 2011 except for this not-so handy tool to profile children. Regardless, the story was good. You have to ignore the That Would Never Happen voice in your head. (school segregation) This is a work of fiction and it does raise a great question. How much of your life is determined regardless of free will? I think every young person should ponder this question. Good mystery, strong female lead, thought provoking.
at Monday, December 05, 2011