I am ecstatic to have Incarnate author, Jodi Meadows, back at the blog! I was mesmerized with her cover last summer and it went immediately to my TBR pile. Incarnate comes out January 31st, don't miss it! Welcome, Jodi!

We talked about your gorgeous cover reveal back in early June of last year. Does your heart still flutter every time you see Ana even after all of these months?
Oh definitely! I still catch myself staring at her sometimes. She's just so magical, plus it's my first cover!

What was the working title of Incarnate or has it always been titled that?
For a long time it was "reincarnation book." Yeah, I'm not awesome at titles. *g* By the time I finished the first draft, it was called Erin Incarnate -- because Ana's name used to be Erin. When her name changed, we dropped it from the title, which was just fine with me; I'd been calling it Incarnate in my head for a while.


Ana is truly a brave and courageous character who only has herself to rely on. Did you model her after anyone?
My characters tend to appear in my head fully formed, but like most people, I've known victims of emotional and physical abuse, and I've done the research to understand what they've gone through. It's sad and frustrating stuff, but I wanted to paint a realistic portrait of someone in her situation. I also wanted her to be someone the reader could cheer for as she grows and overcomes her past.

Being a nosoul in a world full of souls that are continuously reincarnated leaves Ana open to ridicule and abuse. How would Ana have turned out differently if her mother viewed her as a newsoul?
Because her mother was embarrassed of her, Ana grew up in seclusion. If she'd grown up in Heart with a more accepting mother, she might have been educated, and she'd definitely have more practice at social interaction! Her life wouldn't have been perfect, though. The people of Heart would still have varying opinions about her, not all of them welcoming.

Sam is not a perfect knight in shining armor and has some hangups of his own. Do you think that makes him even more perfect for Ana?
Absolutely. Ana is intimidated enough when it comes to him. Even when his issues cause trouble for them, the fact that he has issues makes him human and relatable to her.

The characters in INCARNATE have some unusual names. (Dossam, Meuric, Menehem...) Where did you find these names?
Lots (not all!) are real names, just unusual to some of us. Like most writers, I have a few favorite baby name sites/books. The site I use most is BehindTheName.com

If you were to be reincarnated, who/what would you come back as?
A ferret. No, a cat! No, a ferret! No, a trumpet! Gahh!

Tell me, how excited are you to be coming to see me in Texas? ;)
Squintillion excited!

Care to give some teeny tiny hints about book 2?
Hmm, title hints for book 2: It starts with a vowel. It is an adjective. It has three syllables.
Other vague book 2 hints: More discovery of the world. More characters. More of the characters we've already met. An extra serving of sylph.

Want to read this book? Here is your chance to win yourself a SIGNED ARC! Also, there are 2 mini swag packs - bookplate and stickers - for two lucky readers. Three winners in all. US only. 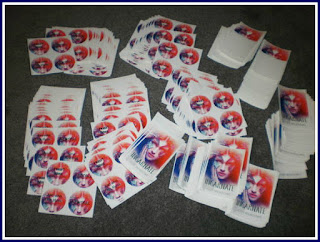 Fill out the fancy doo-hickey below to be officially entered. Good luck!