I am happy to have the Editor of the Goddess Test series, Mary-Theresa Hussey, on the blog today!


Name: Mary-Theresa Hussey
Position: Executive Editor for Harlequin
You might have seen her: as Matrice on Twitter

I’m so pleased to be able to share my excitement about Aimée and the Goddess Test series with you! Thank you for inviting me to give the editor’s perspective on a fantastic series and a wonderful author.

When I read the first version of THE GODDESS TEST in 2009, I immediately wanted more. Aimée’s writing just kept drawing me into this world and these people (more than just characters) and I wanted to know everything right away! There was such a quiet intensity and naturalness to this very magical story. I immediately rooted for Henry and mourned with Kate and cheered her courage—both in facing the tests and doing anything she could to fight for her mother—and wondered at the imagination that brought all this together. 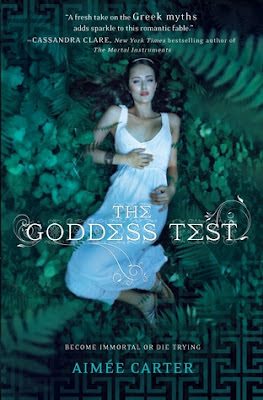 And then I found out that Aimée was so young! Still in college! And that amazed and impressed me even more. And once we started talking about aspects of the story and the structure and what her intentions were, I grew even more excited by her potential. When we went to contract there was also a dystopian novel (MASKED, coming in 2013) so I knew she had the ability to write a wide variety of projects with very different characters as well—something that always makes an editor happy!

But as I shared the manuscript with everyone else in the company and we began talking it up, THE GODDESS TEST just set everyone’s imagination on fire. Originally it seemed to be a stand-alone title, but now we wanted more and more in this world. So Aimée came up with Cronus’s escaping and thus the ideas for GODDESS INTERRUPTED (with that terrific cliffhanger!) and the triumphant THE GODDESS INHERITANCE (2013). And still readers clamored for more! So we went back to Aimée and asked what happened between THE GODDESS TEST and GODDESS INTERRUPTED and lo and behold THE GODDESS HUNT came about.

And still we saw the excitement building with fans and thought, okay, how can we satisfy them, build up the anticipation for THE GODDESS INHERITANCE and drive Aimée almost crazy? Why, by sticking another book between GODDESS INTERRUPTED and THE GODDESS INHERITANCE, of course! With just a few months to get it all done she took up the challenge and wrote the backstories of the Calliope/Hera, Ava/Aphrodite, Persephone, James/Hermes and Henry/Hades. She met all her deadlines and delivered fantastic novellas. And what impressed me even more was how the little threads in the first book—the murders of the other girls, a memory of going to Central Park—were woven into this overarching story.

Those following her on Twitter (@aimee_carter) know there were some other complications—aside from dealing with the page proofs for THE GODDESS INHERITANCE and pulling together the other minutia needed for a book, there was a drive to Buffalo to sign over 4,200 titles, a trip to North Carolina to speak with some of our buyers, the release of THE GODDESS HUNT and GODDESS INTERRUPTED, an illness or two and hand cramps for sure! But through it all she persevered and created a vivid and compelling new installment for this world.

I know I’m going to miss the gods and goddesses—but I have the sneaking suspicion that Aimée might be able to return for some other “forgotten” stories at some point. And you know, Kitty from MASKED is a very different heroine, and I think I just might switch allegiance for a while (but not from Henry! Although I might be tempted by Hephaestus—you’ll know why when you read THE GODDESS LEGACY….)

So who will you be rooting for? Please let us know what you think! You can find us on Twitter @HarlequinTEEN and on Facebook. Thank you for following the GODDESS INTERRUPTED blog tour!

Bio: Mary-Theresa graduated from Villanova University with a major in English and minors in History, Education, French and Honors. Those eclectic interests made her a natural for publishing. And since she’d started reading Harlequin series books when she was eleven, becoming an editorial assistant for Silhouette Romance was the perfect job. Twenty-three years later she still loves acquiring for Harlequin series, but also works with authors for Harlequin TEEN, MIRA and LUNA.

Please visit http://www.onceuponatwilight.com/ for the next stop on Goddess Interrupted Blog Tour and Summer Goddess Giveaway.

Add to Goodreads
You can find Carter at her website
Check out the rest of the tour stops HERE
Purchase books on Amazon, B&N, Harlequin, and Indiebound
Check out the book trailer:

Thanks to HarlequinTeen and Media Masters Publicity, there is one super awesome tote full of goodies for one very lucky winner! Here is what you get: a copy of The Goddess Test, a copy of Goddess Interrupted, Goddess French tote bag, Goddess sunscreen, Goddess beach ball, and a $5 iTunes gift card. I so wish I could win this one! US/CAN only. Ends 5/23, midnight EST. Fill out the fancy doo-hickey below to be officially entered. Good luck! 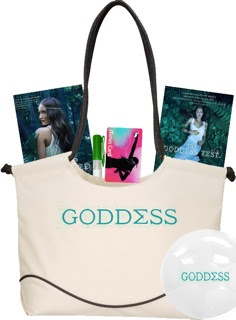