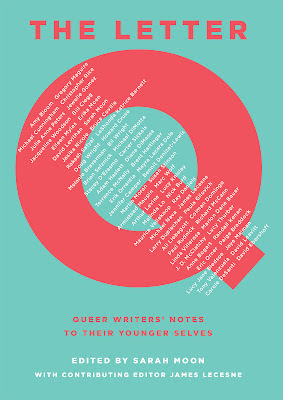 The Letter Q: Queer Writers' Notes To Their Younger Selves edited by Sarah Moon
May 21st, 2012 from Arthur A. Levine Books

In this anthology, sixty-four award-winning authors and illustrators such as Michael Cunningham, Amy Bloom, Jacqueline, Woodson, Terrence McNally, Gregory Maguire, David Levithan, and Armistead Maupin, make imaginative journeys into their pasts, telling their younger selves what they would have liked to know then about their lives as lesbian, gay, bisexual, or transgender people. Through stories, in pictures, with bracing honesty, these are words of love, messages of understanding, reasons to hold on for the better future ahead. They will tell you things about your favorite authors that you never knew before. And they will tell you about yourself.


There are a lot of amazing quotes from this book and wanted to share a few:

"I know it doesn't feel like it, but every time you go through something difficult, you get stronger. Look how much you have already survived." ~ Diane DiMassa

"I will tell you something that those fairy tales don't. You're right to be terrified. Love, in the fullness of its power, will turn you inside out." ~ Malinda Lo

Some of the letters are totally hilarious and some are so heartfelt that you want to reach out and hug the writer. Either way, The Letter Q is a powerful book of love and should be read.

You can find The Letter Q on Facebook
Check out the book trailer:


Here's the fun part - the giveaway! I have TWO copies up for grabs for two winners. US only. Fill out the fancy doo-hickey below to be officially entered. Ends 5/31 - good luck!