Review - One For the Murphys by Lynda Mullaly Hunt 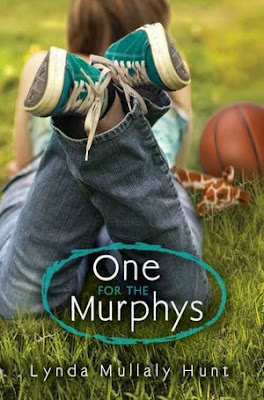 One For the Murphys by Lynda Mullaly Hunt
May 10th, 2012 from (Nancy Paulsen Books) Penguin Young Readers Group

Carley uses humor and street smarts to keep her emotional walls high and thick. But the day she becomes a foster child, and moves in with the Murphys, she's blindsided. This loving, bustling family shows Carley the stable family life she never thought existed, and she feels like an alien in their cookie-cutter-perfect household. Despite her resistance, the Murphys eventually show her what it feels like to belong--until her mother wants her back and Carley has to decide where and how to live. She's not really a Murphy, but the gifts they've given her have opened up a new future.

We meet Carley as she is released from the hospital and making her way to a foster home - the Murphy's. Carley and her stepmonster Dennis had an argument that went too far a few nights prior, and Carly's mother is still in the hospital and lucky to be alive. When details are slowly unveiled, we learn they are both lucky to be alive. Carley's recollection of that horrible night is devastating to read. The details slowly come out, and my heart broke for her several times over. How can a grown man treat a child with such cruelty? And according to Carley, her mother isn't exactly off the hook. I was torn between feeling sorry for Carley's mother and wanting to take her out back and teach her a lesson myself.

I have such a soft for Mrs. Murphy. In a nutshell, she is a giving, patient, and loving woman. Anyone would want her for a mother. She understands Carley's situation, all too well, and is determined to be the rock she needs for the time being. Carley's attitude gives the Murphy's a run for their money, and would be considered deplorable if you didn't know her situation. She is rude and disrespectful and her cynical attitude can be more than just frustrating. Carley has built up enormous walls to protect herself - to guard her true her feelings. Carley and Mrs. Murphy's relationship evolves and Mrs. Murphy continues to see something special in Carley even when Carley cannot open her eyes and see it for herself.

I know there are many Mrs. Murphy's out there, foster parent or not, and this book is a gift for all of them. Touching and triumphant story about what defines family. Highly recommend!