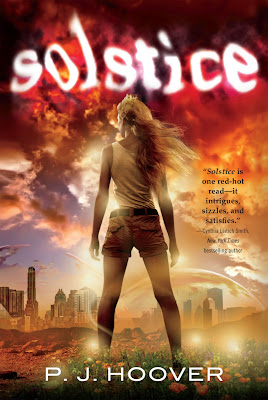 Each day brings hotter temperatures and heat bubbles that threaten to destroy the earth. Amid this global heating crisis, Piper lives under the oppressive rule of her mother, who suffocates her even more than the weather does. Everything changes on her eighteenth birthday, when her mother is called away on a mysterious errand and Piper seizes her first opportunity for freedom.

Piper discovers a universe she never knew existed—a sphere of gods and monsters—and realizes that her world is not the only one in crisis. While gods battle for control of the Underworld, Piper’s life spirals out of control as she struggles to find the answer to the secret that has been kept from her since birth.

An imaginative melding of mythology and dystopia, Solstice is the first YA novel by talented newcomer P. J. Hoover.

I am thrilled to share the cover for Solstice by my good friend P.J. Hoover! She is another shining example of why Texas writers rock! I read Solstice and just loved it! I find mind myself recommending it in the library to girls who love mythology then I have to remember that it isn't even out yet. Zoinks!

The cover is exactly what this book is about, and the blurb for Texas' own Cynthia Leitich Smith sums it up: “Solstice is one red-hot read—it intrigues, sizzles, and satisfies.” Bookmark this one and set your sights on one hot read in June 2013! Congrats, P.J.!

Add to Goodreads
You can find Hoover at her website, blog, and at Texas Sweethearts & Scoundrels
Find Solstice on Facebook

To celebrate, Hoover is hosting a giveaway! Check it out HERE