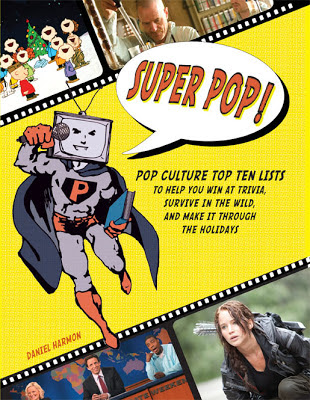 Super Pop!: Pop Culture Top Ten Lists to Help You Win at Trivia, Survive in the Wild, and Make It Through the Holidays by Daniel Harmon
June 4th, 2013 from Zest Books

As David Letterman demonstrates on the Late Show, top ten lists are really funny. And we know lists are a great way to get organized, get things done, and streamline life’s many tasks. But now, pop culture expert Daniel Harmon takes a totally new approach to list making in his new book Super Pop! and organizes 500 movies, songs, video games, and books into top ten lists that not only have the power to entertain, but also to help create a new and better you!

Will people pick up Super Pop! for the Katniss image on the cover alone? Maybe, but that's not all this book has to offer (obviously). Jam packed with useful-useless information (think about scoring big at parties with random Jeopardy facts), Super Pop! is a great pick for those who love thumbing through book of lists, Guinness Books, and  book of world records. My top two entries were 'Ten Essential Catchphrases For Use at Dinner Parties' and 'Rest Assured: Movies Where People Get Exactly What They Deserve'. Catchphrases include the always winning "May the Force Be With You". The author suggests the reader use that phrase and then promptly steal all of the leftovers at the dinner party. I may try that... Hours and hours of fun are in your future!

Add to Goodreads
You can find Harmon at his website
Check out the rest of the tour!

One lucky winner will a SIGNED copy of Super Pop! Fill out the fancy doo-hickey to be officially entered. US only, good luck!
a Rafflecopter giveaway
at Monday, June 17, 2013