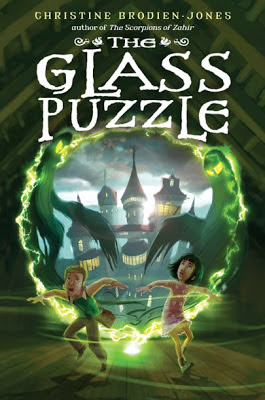 The Glass Puzzle by Christine Brodien-Jones

Eleven-year-old Zoé Badger, imaginative, carefree and adventurous, lives a transient life, moving with her mother from one town to the next-except for summers, when she stays with her granddad in Tenby, Wales. But when she and her cousin Ian discover a glass puzzle that's been hidden away for decades, ancient forces are unleashed that threaten to change their safe-haven summer town in sinister ways.

Why We Love Quirky Characters
By Christine Brodien-Jones

The first quirky characters I ever met were inside the covers of a book: Dr. Seuss’ bizarre, whimsical, colorful creatures. Ever since then, I’ve been drawn to quirky characters. Take the adventurous Pippi of Astrid Lindgren’s Pippi Longstocking, my first literary heroine, a super-girl in mismatched clothes, so strong she could lift a horse into the air! And Matilda Wormwood, a brilliant, lovable little girl who used her wit and magic to defeat the terrifying Miss Trunchbull in Roald Dahl’s Matilda. Dahl is brilliant when it comes to creating quirky characters. Then there’s Rob Horton and Sistine Bailey, two offbeat kids in Kate DiCamillo’s The Tiger Rising, who learn that some things in life can’t be caged forever. And Luna Lovegood from J.K. Rowling’s Harry Potter series definitely falls into the quirky category. Recently I encountered Early Auden, a true misfit and oddball who appears in Claire Vanderpool’s Navigating Early.

It seems that well-drawn, quirky characters stay with you long after you’ve finished the book. They’re the ones you remember, even years later, because they were so unpredictable and mysterious and totally different from anyone you’ve ever met. I always wished I could meet these characters—I mean, how cool would that be? Their personalities were multidimensional and I felt I knew them really well despite their strange habits and the odd things they said and did. Maybe it was because, for that brief magical time I was reading the book, I saw the world through their eyes.

My most recent book, The Glass Puzzle, is set in Wales, in the small coastal town of Tenby, known for its pirates, smugglers and ghosts. In Britain quirkiness abounds. Eccentrics, they’re called: daft, endearing, odd-duck people with wacky behaviors, off-the-wall opinions and weird senses of humor.

When my two main characters Zoé and Ian try to learn more about a glass puzzle they’ve found, they track down the loquacious, blundering Dr. George Marriott, a seller of rare books, who babbles on about alchemy, portals and secret societies. I describe him this way:

“Then, without warning, the door flew open and a bulky shape filled the doorway . . . . With one glance Zoé took in the small walrus mustache, corduroy blazer and a T-shirt with the words IDEAS MAY BLOSSOM—HAYFESTIVAL.COM. The man was bald save for tufts of hair that sprang over his ears, giving him the appearance of a disgruntled owl. In one earlobe hung a tiny gold hoop. She hadn’t expected the earring.”

Another offbeat character in the book is Bron, a tattooed, no-nonsense, brawny young woman who speaks in clipped sentences and dabbles in spells and enchantments. Here she is:

“Bron Gilwern was waiting for them, standing before a faded red door outside a derelict building at the end of Tor Lane, THE GASLIGHT COMPANY OF TENBY etched into the archway above her. Zoé thought Bron looked ageless and watchful, like a gatekeeper in a fairy story. Her hair looked even shorter and more brittle than yesterday; today it was flaming orange. . . . ‘Stay invisible,’ said Bron, stuffing the map into her leather jacket. ‘Not a word out of you.’ ”

Finally, there’s the slinking, suspicious, raspy-voiced Stokes, an assistant curator at the Tenby Museum. When Zoé asks him about wreckers, he replies:

“ ‘Robbers, thieves, for want of a better word.’ The man’s voice was like something rusty being scraped with a knife. ‘Stood on the cliffs of Caldey in the dead of night, swinging lanterns to lure passing ships. Afore long a ship sails past and makes for the light, then . . . crack!’ A tiny spray of spittle flew from his lips, and Zoé’s stomach turned over. ‘The ship breaks up on the rocks and, like horrible crabs, the wreckers scuttle down, picking the wreckage clean.’

‘But . . . why didn’t the Wythernsea people stop them?’ asked Zoé, confused. ‘Why didn’t they fight off the wreckers?’

The quirkiest character in my book The Scorpions of Zahir doesn’t appear until halfway through the novel: Pitblade Yegen, a desert explorer who’s been wandering for years in the Sahara, now a turbaned, near-sighted, scrawny, insect-eating hermit who is now living inside a cave. Zagora and her brother accidentally stumble upon him while searching for their father who’s gone missing in the desert.

“Zagora saw a look of infinite sadness cross his weather-worn face. His expression was etched with misery, and she suddenly felt a kind of pity for him. She watched him put something into his mouth and heard it crack between his teeth. ‘Care for one?’ Licking his dry lips, he held out a handful of insects. ‘Fried purple locusts. Quite succulent.’ He waved a skewered locust in the air. ‘I’m not terribly fond of beetles, they leave a bitter aftertaste.’ ”

Finally, I think Rose from my novel The Owl Keeper qualifies to some degree as quirky, with her mysterious background and outlier personality:

“Looking into those green eyes, too big for her face, Max could see that the girl was different in a scary kind of way. Those eyes had a lean, hungry look. Her woolly black coat hung to her ankles, a spider dangling from the hem. Sticking out from under it were long, bumpy toes. Nobody around here dressed in clothes like that, and nobody Max knew would dream of going barefoot in this damp climate.”

So there you have it. For all you readers, here’s to many happy hours meeting quirky characters in your literary travels! 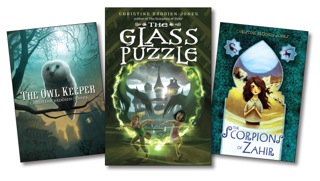 Giveaway time! THE OWL KEEPER (2010), THE SCORPIONS OF ZAHIR (2012), and THE GLASS PUZZLE are up for grabs for one lucky US winner. Fill out the fancy doo-hickey to be officially entered. Good luck!

a Rafflecopter giveaway Check out the rest of the tour: