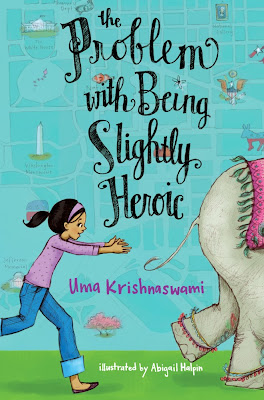 The Problem with Being Slightly Heroic by Uma Krishnaswami & Abigail Halpin
August 13th, 2013 from Atheneum Books for Young Readers

Dini and Maddie, very best friends, are back in the same country at the same time! Better still, Dolly Singh, the starriest star in all of Bollywood, is in America too. Dini’s only just returned from India, and already life is shaping up to be as delicious as a rose petal milk shake. Perfect. Then why can’t she untie the knot in her stomach? Because so much can go wrong when a big star like Dolly is in town. All Dini has to do is make sure Dolly has everything she needs, from a rose petal milk shake to her lost passport to…a parade? And an elephant?

Uh-oh… It’s time to think. What Would Dolly Do? If Dini can’t figure it out, Dolly might take matters into her own hands—and that will surely lead to the biggest mess of all!

You can find Krishnaswami at her website
Check out the booktrailer

Happy Dancing: How a Wacky Bollywood Star Made Her Way Into My Story

What might Dolly say about her adventures in The Problem With Being Slightly Heroic? She’d be waving to fans, I think, speaking into a mic that someone has offered her. Mics and fans show up where Dolly is, just like rose petal milkshakes—and trouble! She’d probably say something like this:

“Thank you thank you thank you! I want you to know that I love-love-loved Washington DC, and that nice hotel and my fans from all over the world who showed up for the grand opening, and of course all the marvelous people who worked so hard to make my perfectly heroic trip to the USA possible. I thank you all. I wish you all happy dancing!”

She’d sing a few bars from one of the songs from her latest movie. She’d leave them all smiling. Because that’s what Dolly does. She lights up a room when she walks in. In her own madcap way, she makes people want to dance.

When Dolly showed up as a character in a very early draft of The Grand Plan to Fix Everything, I was surprised. I had not intended to write about a Bollywood star. But there she was, and Dini plainly adored her, so what could I do? I thought of the fan letters I’d written to writers when I was a kid, pulled up that feeling of loving somebody’s art so much it makes you happy, and went to work. By the time I got to writing The Problem With Being Slightly Heroic, I felt I knew Dolly. She was a friend. I knew how she’d react to everything from jet lag to mislaid plans to lost possessions. I knew how she’d run into danger of disappointing her young fans, and where she would come through with flying feet, jaunty music, and attitude.

Finally, when it came to choosing a setting in the DC area for this book, Dolly played a role. I was at the National Book Festival in 2011, and I made some time to wander through the Enid A. Haupt Garden at the Smithsonian Institution. When I came to the Moongate Garden outside the Freer-Sackler complex, I was smitten. Dolly had to dance there. I’d spoken at SALTAF (http://apanews.si.edu/2011/11/14/saltaf-2011-recap/) at the Smithsonian, some years before. I knew that Dolly needed to lead off her version of SALTAF—complete with a parade and an elephant!

Here’s a little video shot mostly in that garden—more or less from Dolly’s point of view. Both The Grand Plan and Slightly Heroic are Dini’s stories, but Dolly creates the tension, and forces Dini to deal with the world. Dolly is the catalyst who makes me root for my slightly heroic kid character.


Here is a chance to win a brand new copy for yourself. Fill out the fancy doo-hickey to be officially entered. US only, good luck!

Check out the rest of the tour for more chances to win:

Wed, Aug 21
Once Upon a Story
http://www.novalibrarymom.com/
Soli Dustup