Giveaway: Two Lies and a Spy by Kat Carlton 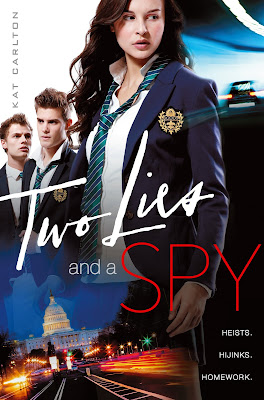 Two Lies and a Spy by Kat Carlton

When sixteen-year-old Kari’s dad sends her an unexpected text, she and her brother immediately go into hiding. Because when your parents are superspies and your dad declares a Code Black, it can only mean something bad. Very bad.

Kari soon discovers that her parents have been disavowed and declared traitors, and she’s determined to clear their names. Breaking into the Agency seems like a reasonable plan, especially with the help of a team that includes her longtime crush, Luke, as well as her two best friends—an expert hacker with attitude and a master martial artist—and Luke’s popular, vindictive twin sister. Oh, and a new guy, who’s as cute as he is complicated…

A spy is only as good as her gadgets - up for grabs is an emergency phone charger and a copy of Two Lies and a Spy! Fill out the fancy doo-hickey to be officially entered. US only, good luck!

a Rafflecopter giveaway
at Monday, September 09, 2013