Guest Post: A Season for Fireflies by Rebecca Maizel 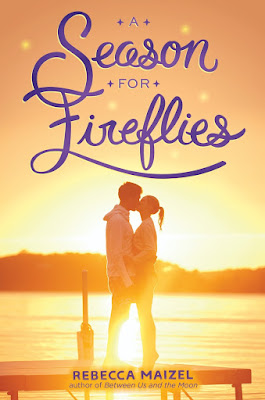 A Season for Fireflies by Rebecca Maizel
June 28, 2016 from HarperTeen

A year ago, Penny Berne was the star of her high school’s theater department, surrounded by a group of misfit friends and falling in love for the first time. Now her old friends won’t talk to her, her new best friend is the most popular girl in school, and her first love, Wes, ignores her. Penny is revered and hated. Then, in a flash, a near-fatal lightning strike leaves Penny with no memory of the past year—or how she went from drama nerd to queen bee.

As a record number of fireflies light up her town and her life, Penny realizes she may be able to make things right again—and that even if she can’t change the past, she can learn to see the magic where she never could before.

This captivating new novel about first love, second chances, and the power of memory is perfect for fans of Lauren Oliver’s Before I Fall and Katie Cotugno’s How to Love.

Excited to have Rebecca Maizel on the blog today talking about her Top 5 Favorite Memories!

5. Achieving my MFA from Vermont College of Fine Arts. 2010-2012 were some of the worst years of my life. Health wise I was not doing well and professionally, let’s say I was learning a lot! The bright spot in my life was attending Vermont College of Fine Arts. I interacted and met such brilliant writers and worked with mentors who forever changed me as a writer & teacher. VCFA is magic.

4. Rock Harbor Orleans, MA. My favorite memories here are from either this past summer or a few years ago. This is a really magical place on Cape Cod. It’s a beach/marina where trees were implanted into the sand as buoys. When it’s low tide at Rock Harbor, the sand stretches for (what seems like) miles. But you can walk out to the pine trees and swim around them. Also tons of teeny, tiny hermit crabs. The sand is purple and pink. You can bring your dog after 4pm, so it’s just a special experience, a special moment, and it might be what heaven looks like. Sorry for the hyperbole, but it’s true.

3. Guns N’Roses first row this past July 19th. For those who follow my Instagram -- you know how much I love this band. So you can imagine my insane happiness when Slash & Duff rejoined Axl Rose completing the most successful incarnation of GNR since the original line-up 25 years ago. I wish Izzy Stradlin and Steven Adler had been there but it’s not happened yet. If the original line-up reunites completely– I might freak out. I also saw them in Vegas back in April and that was incredible. Sebastian Bach joined them on “My Michelle” and I cried the entire show. Literally. I might need help.

2. The births of my niece and nephew. It’s cliché because so many people would say this, but I didn’t know how much I could love another human and so immediately. The moment I held them both, I fell in love. There’s nothing I wouldn’t do for them.

1. Publishing my first book, Infinite Days. One of the most important moments in my life was getting the phone call that my book had sold. My agent, at the time, called and when he said the words, “Brazil has offered you a deal!” I was standing outside my part-time teaching job. The air was still decently cool from the late spring air and I jumped up and down on the block. My book later sold in 11 territories around the world (including the US). That phone call remains one of the happiest moments in my life.
at Monday, August 15, 2016