Okay, I admit it. I have a reluctant reader. Actually, I had a reluctant reader. Thanks to the Percy Jackson series my 11-year-old reads till the wee hours of the morning. Like many kids in this age range, she watched The Lightning Thief movie. She was hooked and read the first book in a matter of days. She went on to read the whole series back to back with no breaks. This amazed me! The only thing my 11-year-old liked to read was anime and manga. This is OK with me, but you always want a reader to branch out a little bit. ;)
Luckily, Rick Riordan (author of Percy Jackson series) lives very close to Austin, and he always comes up for a book release party at Book People. What is Book People? The best Indie book seller in the world. Check em out! Back to story.... So, 11-year-old and I headed down to get our book and meet Rick. They had the whole parking lot set up with activities from Camp Half Blood. What's Camp Half Blood? Look HERE. Anyway, there were weapons for kids to explore, a fighting ring where men played the Gods and fought it out in the mud (so cool). There were 3 centaurs, knights, maiden's, kings, and even a talking tree! 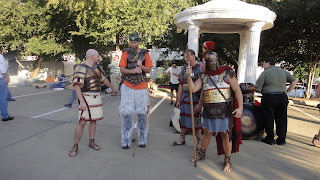 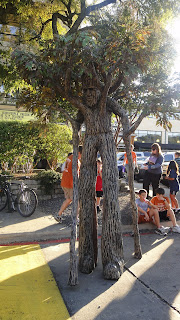 Rick came out and read a few pages from his new book The Heroes of Olympus, Book One: The Lost Hero then went on to give us some information about the direction of the series, future books, and his personal opinions on everything Percy. Here's the skinny:
There will be a total of 5 BOOKS in the Heroes of Olympus series.
There will be a total of 3 BOOKS in the Kane Chronicles series.
He says he has NO opinion on The Lightning Thief movie because he hasn't watched it. He said he has a vision of Percy and the other characters and didn't want that to change by watching the movie. Hmmmmm
He said that if he had to choose, he would be the son of Poseidon.
He said Percy and Leo are more different than alike.
All the characters from Percy Jackson will show up in the Heroes series.
Yes, Percy and Annabeth are sill "together." 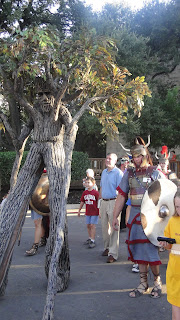 Talking Tree walking Rick out to the crowd 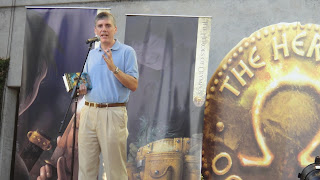 Rick talking to the crowd
I wish I had a picture of the crowd - they were so bonkers for Rick!
Happy Reading!
at Thursday, October 14, 2010