Guess what!?! Sweet Valley High lives on! Sweet Valley Confidential: Ten Years Later will explore the lives of twins Elizabeth and Jessica Wakefield who are now estranged. What happened to Elizabeth (the mild one) and Jessica (the wild one) after they left the California coast? Take from People.com:

While Jessica still lives in their hometown, Elizabeth has moved to N.Y.C. – and is looking for revenge toward her sister. What did Jessica do to cause the rift? Do they still wear matching lavaliere necklaces? Whatever happened to Todd Wilkins? And is Winston Egbert still a dork? Find out when the book hits stands March 29. 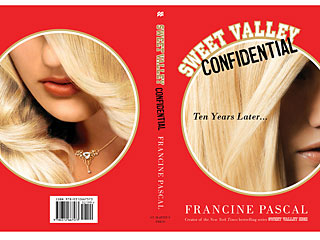 I am SO excited!! I loved SVH so much when I was in school. I could zip through one of those books in a day. You can pre-order now. Not sure when Amazon will have the new cover up. Here is an interview with the author Francine Pascal from the Teens @ Random (Random House):


Where did you grow up?
New York City.

Where do you live today?
New York City and the South of France.

Did you always like reading?
What was your favorite book growing up?
I always loved reading. Growing up, my favorite book was A Child's Garden of Verses by Robert Louis Stevenson.

Did you always want to be a writer?
Yes, since I was a small child, I was always writing either poems or plays. . . plays in which I had the starring part.

How did Sweet Valley begin?
I originally planned to sell the idea for a daytime drama featuring teenage characters to television networks, until a friend suggested that a book series, rather than a television series, might be the best way to fully develop the fictitious Southern California town of Sweet Valley. The rest is publishing history — and now a TV show, too!

Where do you get your ideas?
I get some of my ideas from watching my three daughters, but most of them come from my own memories of growing up. I can remember how romantic I was, not just about love, but romance in the classic sense — the romantic ideals: of honor and truth, of loyalty, sacrifice and fairness. Those were the elements that made a story satisfying to me. And that what I try to put in all my books. Plus action. Everybody likes action.

How did you come up with Jessica and Elizabeth Wakefield?
I always had a fascination with twins. The trick is to think of Elizabeth and Jessica as the good and bad sides of one person.

What is it like to have the characters you created come to life in the TV show, Sweet Valley High?
It's marvelous! Just the way I had pictured it. The characters have grown and the acting is good and I am very pleased.

Oh gosh, I hope she does a tour! *crosses fingers*