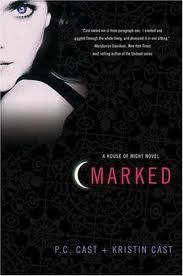 From the Publisher:
The House of Night series is set in a world very much like our own, except in 16-year-old Zoey Redbird's world, vampyres have always existed. In this first book in the series, Zoey enters the House of Night, a school where, after having undergone the Change, she will train to become an adult vampire--that is, if she makes it through the Change. Not all of those who are chosen do. It’s tough to begin a new life, away from her parents and friends, and on top of that, Zoey finds she is no average fledgling. She has been Marked as special by the vampyre Goddess, Nyx. But she is not the only fledgling at the House of Night with special powers. When she discovers that the leader of the Dark Daughters, the school's most elite club, is misusing her Goddess-given gifts, Zoey must look deep within herself for the courage to embrace her destiny--with a little help from her new vampyre friends.
Review:
This is a difficult book to review. There were elements of the book I liked and elements that were totally rediculous!

What I liked: It was an easy and fast read. Interesting story with good ideas. The premise works and the usual characters are there - hot boy, confused girl, snotty nemesis, and loyal friends. Mystery and betrayl...the usual.

What I didn't like: Oh, let's see. How about the introduction of oral sex on pg 50 something. That would be a good start. I'm not being a prude. I just found the scene off and misplaced (and a tad early considering this wasn't a coming of age read). The scene literally came out of nowhere. (girl turns the corner and wham...) I don't see why it had to go there. After all, they were in a school hallway! Now, I sound like a grandma, "You kids better not be neckin'!" Anyway, what made the whole situation worse, for me, was the very preachy message about oral sex a few pages later. We are told by another young female character that only desperate or pathetic girls do "that." Uh, okay. Weird, weird piece of advice. Also, the jabs at celebrities were pretty cruel and unnecessary. Sarah Jessica Parker and Paris Hilton were made fun of repeatedly. I thought it was rude considering the snotty behavior was targeted at a living person. You're a writer....make something up to say about a character!
Not sure I will stay tuned.....