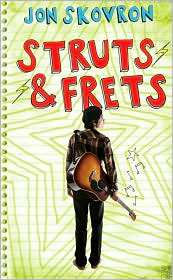 Told in a voice that’s honest, urgent, and hilarious, Struts & Frets will resonate not only with teenage musicians but with anyone who ever sat up all night listening to a favorite album, wondering if they’d ever find their place in the world.

Music is in Sammy’s blood. His grandfather was a jazz musician, and Sammy’s indie rock band could be huge one day—if they don’t self-destruct first. Winning the upcoming Battle of the Bands would justify all the band’s compromises and reassure Sammy that his life’s dream could become a reality. But practices are hard to schedule when Sammy’s grandfather is sick and getting worse, his mother is too busy to help either of them, and his best friend may want to be his girlfriend.

When everything in Sammy’s life seems to be headed for major catastrophe, will his music be enough to keep him together?

Review:
I haven't read a YA book from a male perspective that was written by a male in a long time. It got me thinking....I'm not really sure there is a whole lot out there. A lot of the titles I think about are more J FIC than Y FIC. Carmen, Colfer, Riordan, etc...

Struts & Frets is a story about Sammy and his two loves: his music and his changing relationship with his BFF Jen5. Sammy has an honest voice. He tries to please his mother, his friends, and his bandmates. His grandfather, a former profesh musician, is literally losing his mind. Sammy seems to be the only one that can reel him back into reality. Sammy and his grandfather talk about music, his grandfather was a pretty well known musician. The two have a sweet relationship and it's hard to see Sammy's grandfather slip into dementia. With all of these relationships that seem to have big highs and big lows, music is always a constant. Music is reliable and he has natural talent for song writing - the singing is something he is working on.

Very real; very worth the read. A great recommendation for any middle school or high school boy. We need more of these!