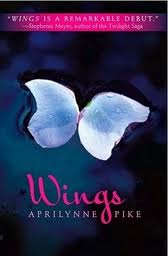 Wings by Aprilynne Pike
Published May 1st 2009 by HarperTeen

From the Publisher:
Laurel was mesmerized, staring at the pale things with wide eyes. They were terrifyingly beautiful—too beautiful for words.

Laurel turned to the mirror again, her eyes on the hovering petals that floated beside her head. They looked almost like wings.

In this extraordinary tale of magic and intrigue, romance and danger, everything you thought you knew about faeries will be changed forever.
Review:
Laurel is embarking on a new challenge, public high school. Her mother has always home schooled Laurel, but at 15, it is decided that she needs to attend a regular school. Laurel is apprehensive. She worries about what to say, wear, and eat. Laurel feels different and isn't sure how that will go over with everyone else. For instance, she is described as being magazine beautiful and only eats raw fruits and vegetables. Her first day doesn't go so bad. She meets a nice young boy named David and they eat outside away from the rest of the crowd. They talk for a whole 22 minutes and bam....he is hooked. At least Laurel doesn't fall head over heels instantly. David and Laurel form a fast friendship. You can tell he wants more, but Laurel has enough sense to know that it's too soon to say there is something more than friendship. Summer turns to fall and  Laurel develops a blossom. That's right, a flower bloom right out of her back. SPOILERS ---->>> It starts out as a small bump, and soon turns into a softball size lump that grows into a flower. Instead of turning to her mother whom she has had an unbelievable close relationship with, she turns to her new friend David. David is understanding and together - with the help of another faerie named Tamani that lives at her old house in the woods- they learn that she is a faerie. When a mysterious man tries to buy her parents old house and land, Laurel and David's adventure heats up. Laurel must convince her parents to keep the land or...else (I'm not quite sure we learn what the 'else' part is). Major SPOILERS ---->>> Too bad the man is a troll and has poisoned her father trying to convince them to sell. So, here we have a girl who is now a faerie who is kinda falling for this average boy David. Through in a troll and another faerie who has loved and watched her since she was a baby, and you get Wings.
I went in thinking this is a YA book when I really believe it is more appropriate for a middle grader. For me, I was looking for the sinister, mysterious, evil faerie like you see in Tithe and Paranormalcy. Not here. I was also wondering where the heck Laurel's friends were! She is 15 and moves to a new house about 30-45 minutes away from the house she grew up in. You would think there would be one conversation with an old friend! Also, I had issues with Laurel turning to David when she grows a blossom. A home schooled girl who just met a boy a few weeks prior will be too afraid to tell her mother and instead, tell a boy whom she just met? Hmmm.
I think the book has some sweet qualities. I like David. He is understanding, true, and kind. I appreciate that the two teenagers don't fall in love (desperate love) withing the first 50 pages. Laurel is smart about their relationship. She isn't quite sure whether she is attracted to him because she needs him or because she truly likes him more than a friends. I also, for the most part, like Laurel. I don't like the name, but I like her. At times I have a hard time empathizing for Laurel and/or David. Things got a little slow and I was waiting for the big climax.
One thing I really didn't care for is the narration by Mandy Siegfried. She read it like it was a preschool storytime. Her inflections were so high and it really seemed to turn the book into a juvenile story instead of YA. Mandy's voice of the mother was over the top! The voice was right out of a terrible after school special. "Hello Laurel, how was school today? Would you like some peaches?" Ugh. The audio portion isn't Pike's fault, BUT it really did confirm that this book is best as a middle school read. Recommended for ages 12-15.
3 out of 5 stars.
Happy Reading!
at Wednesday, December 01, 2010