If you haven't read my full review of Blessed, hop over HERE. Cynthia is a local author (Viva Texas!), and I am always excited to run into her. Here we are at TLA in April! 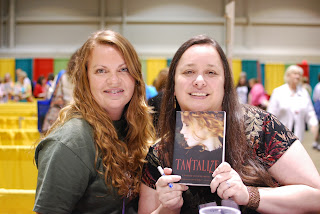 Your blog, Cynsations, has won numerous awards and you were in my text books for library school! How do you juggle writing, being a faculty member for Vermont College, of Fine Arts, blogging, touring, and daily life struggles?

Thank you! It's not so much juggling as standing in the line of fire and trying to catch each incoming missile, flip it, and heave it back into the world. Or something less artillery sounding.

At the moment, I'm on leave from teaching. But I hope to start working with students again soon. Basically, unless I'm speaking, my typical day involves the business of being an author in the morning, sometimes into the afternoon. That time is allocated to posting the blog, media, business correspondence, working with event planners, and other publicity. On a good day, I'm writing fiction by 10 a.m., but it's not unheard of for me to open my manuscript in progress after dinner.

That's okay, though. My husband, Greg Leitich Smith, is also an author. But he has a day job, so I often get in another session, writing with him in the evenings. If I'm on the road, then I seldom try to write new scenes, though I may well read and mark up manuscripts in progress, especially on planes. It's typically all I can do to keep my email caught up and put out any unexpected fires. I know authors who're really successful at writing on the road and still wowing the crowd. Maybe it's that I'm not as good at compartmentalizing, but when someone has brought me in for an event, I want to be really present and engage with them and the audience. And that seems to take a 100% commitment.
When Blessed is released this January, it will be 4 years since the first installment, Tantalize. How do you feel now that Quincie's story has been told?
I started making notes on Quincie in late 2001/early 2002, so it's been quite a journey. She may well have small roles in future books-the graphic novels start coming out in Aug. 2010-but Blessed does conclude her big arc in the prose novels.

I'm proud of Quincie. I'm glad that I didn't cave to the commercial pressure of putting a romantic bow at the end of Tantalize. I'm glad that challenged some readers, especially the two girls who wrote to say they left their abusive boyfriends because of her example.

I'm thrilled that reader-and-publisher support gave me the opportunity to write more books and tell the rest of Quincie's story. In Blessed, she took back so much of what had been taken from her in Tantalize. I love that she's smart and ambitious and sensitive-that, after everything she's been through, she still has a sense of humor and can embrace life and a new beginning while still holding onto the people and places she holds dear.

Finally, I feel that her arc makes a fresh and substantive contribution to the literary tradition surrounding the vampire mythology. It calls long accepted metaphors into question, especially as they relate to gender, power, and the ability to be defined by someone else (versus defining yourself).

Austin, Texas is almost like a side character in Tantalize and Blessed. How does the "weird" city inspire you as a writer?

It's funny. When I go to other parts of Texas and tell them about the shape-shifters and vampires and guardian angels in Austin, they all nod sagely like that explains a lot. Our reputation for weirdness is well earned, I suppose. What strikes me about central-near south Austin is that it's a place of optimism and possibility. People embrace their quirks and make them work, often in surprising and inspiring ways. But beyond that, Austin is home to one of the best youth lit and writing communities in the world. Brian Yansky, Jennifer Ziegler, and April Lurie have crafted totally different YA novels, drawing on that same Austin setting.


When you were writing Tantalize and/or Eternal, did you know exactly what characters would make an appearance in Blessed?

I knew the pending threads in Tantalize that I still wanted to address. But I didn't have a clear sense of the mix until I was fairly far into Eternal. Much of it evolved naturally. For example, the staff at the estate in Eternal included a top-notch chef named Nora, and we knew that Quincie had kicked Brad out of Sanguini's at the end of Tantalize. She'd need a chef to replace him. Likewise, when Miranda asked Zachary at the end of Eternal to help neophytes like her, those who could still be saved, I couldn't think of anyone more deserving to be his next assignment than Quincie.
Bram Stoker's Dracula is an integral part of Blessed. Do you think the story of Dracula can measure up to today's horrific standards? In other words, would teens find the story scary and entertaining today?

The execution of Dracula demands a somewhat sophisticated reader. The 1890s prose style is heavy and repetitive. The fantasy element doesn't quite hold together, and critics continue to debate who the protagonist might be. (My vote is Mina.) But the story? Sure. If I did a straight-up plot retelling in my own voice, I could scare the teeth off of today's teens.
Quince and Kieren have a love bond that shouldn't be possible, just like Zachary and Miranda (Eternal). Is it true - all you need is love?

I would agree about Zachary and Miranda. Angels are supposed to hold themselves apart in general. A vampire was clearly a bad choice, but in fairness, Zachary fell for his girl back in her human days. Now that she's in heaven, the good-evil conflict is out of the equation but, given his earthbound status, the promise of seeing her someday is hard to hold fast on a day-to-day basis.

Quincie and Kieren make an easier match. Sure, he's a werewolf and she's a vampire, but again, their romantic history predates her transformation. Going into Blessed, the big question-at least in her mind-is whether she's still worthy of him, of going on at all. Kieren, being Kieren, never doubts her. I adore that about him.

That said, actually, no, I don't think all you need is love. Over the years, my fan mail has been abundant and overwhelming positive. But I definitely punched the buttons of a couple of girls-one who argued that you're "nothing, nothing, nothing" without a boy to love you and another who said that Quincie couldn't love Kieren because her family restaurant and other people also mattered to her. "Giving up everything for him is what love is," she argued.

So, for the record: No, romantic love isn't all you need. You need yourself, your own interests, and additional people to care about. That will make the love real and far more resonant. That will amplify the love in a way that being someone else's echo never could.
The cover art for Blessed is beautiful! Is that you in that fancy white dress?

Thank you! All the credit goes to the amazing folks at Candlewick Press. And it is fancy, isn't it? My closest dress to it would've been my wedding gown, which was far simpler, with clean lines and just a hint of a teardrop to the skirt.

Predator. I have the law degree to prove it.
Do you know any of your tour stops for 2011?

Yes! The launch party will be at 2 p.m. Jan. 29th at BookPeople in Austin. I'll be sharing the stage with fellow Austinite Mari Mancusi, who'll be celebrating her new release, Night School (Berkley, 2010). From there, I'm off to the northeast. I'll be in New York, New Jersey, Connecticut in February, and then swooping down to Florida in March.

Here's a sneak peek sampling; see my website/blog for a more complete listing:

Saturday, 3/19/11: Southwest Florida Reading Festival, Fort Myers, FL
And watch for Tantalize: Kieren's Story, a tie-in graphic novel, illustrated by Ming Doyle, which will be out from Candlewick in August 2011. I'll definitely be heading to Houston and who knows where else in celebration of that release!

THANK YOU, Cynthia!
THANK YOU!
You will happy to hear that I am giving away my ARC of Blessed to one lucky winner! Cynthia has also thrown in a cute little bat (important in the story and to Austin, TX) and a Tantalize postcard.
Contest Rules
US address
Must be a follower
Contest ends at midnight CST, Sunday, January 9th
Winner will be chosen using Random.org
Must fill out the form below to be officially entered
Good luck!
*Giveaway closed*