If you haven't read my full review of Drought, hop over HERE. Pam is such a gracious author and a lot of fun to meet in person. I encourage you to find her on tour! 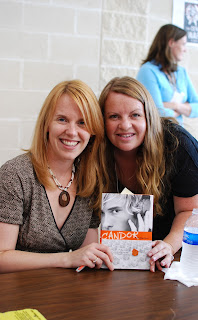 It sounds like you are a lifetime student (like me), how has your academia influenced your writing?
More than anything, my college experiences taught me to write quickly and thoroughly, without a lot of fluff. I also learned to write no matter what my mood was, or where I was sitting. Getting my MBA, especially, taught me that. I had to write several papers a week, in that program, and there wasn't time for agonizing or getting writer's block. This can be VERY useful when working on first drafts!
I also wrote a little post on why Journalism majors make excellent YA writers: http://www.pambachorz.com/blog/2010/1/13/5-reasons-why-journalism-majors-are-excellent-ya-writers.html.
DROUHT is your second book; which was easier to write?
They were both their own very special torture! CANDOR took a lot longer and I spent a lot more time waffling on plot and characters. But DROUGHT was this big intense project that I finished in about a year. I think DROUGHT was easier to write but harder to endure; I had a hard time stepping out of the book's (brooding) mood sometimes.
Ruby and the Congregation are enslaved to a big meanie named Darwin West. Who did you have in mind when you were creating his character?
Darwin West stepped up, chains in hand, pretty full formed. With him, I wanted to show someone whose denied love had twisted him, and also I wanted to show what happens when someone with resources goes unchecked. Some people will do dark, dark things if nobody is watching.
In the beginning, I was mistaken about the time period of DROUGHT. The events sound like a scene from 1824, but we soon learn that this story takes place in the present. I was totally freaked! Could this really happen today?
I definitely think so. There are still mountains in upstate New York that don't have names--and you can drive past "Posted" woods for miles, and miles, without any sign of life except the occasional narrow dirt lane leading off into the trees. Who's to say who lives up there, and what they are up to?
Ruby has a very special gift that the Congregation relies on (even if they don't know it). Why water? Why blood?
My original inspiration for DROUGHT, as hokey as it sounds, was a vision. I was driving through the upstate NY country and passed by a barn, half fallen down. I suddenly had a picture, in my mind, of a glass of water, set on a table in that barn. Blood was dripping into it. I never did get the barn into the story... but the water and the blood remained.
Ah, Ford. So many great things to say about Ford. He really is stuck between a rock and a hard place, and we want him to rescue Ruby so badly. Why not go a little easy on him?
Poor, poor Ford. It really is a tough job to be one of my characters. I picture a room full of characters somewhere, waiting for an author to pick them--and when I call them up, they say "Not her! Please! She's going to torture me!". Seriously, I wanted to make Ford a real guy--not someone idealized, but someone with decent instincts and morals who's caught in a very bad situation. And that means he will, inevitably, make at least a few very bad choices. Sometimes those are the only choices left to you.
You just had a birthday! What did you do to celebrate?
We went to lunch at Founding Farmers, one of my favorite DC restaurants (best cornbread ever).  Then we checked out a special exhibit of Norman Rockwell paintings at the Smithsonian--they were all from the private collections of Steven Spielberg and George Lucas. Finally we picked up some cupcakes at a bakery I hadn't tried before. No birthday is complete without cupcakes.
What are you working on now?
I am working on a new world, new characters, that I am very excited about.  Once again I started with inspiration from a setting--but for now, that setting will have to stay Top Secret!
You came to Texas in 2010, how did it feel to meet me? Kidding! Any plans to come back to us?
Well, OBVIOUSLY the highlight of 2010! :) Texas has been so supportive of CANDOR and I have a special place in my heart for Austin. I mean, how can you not love the home of Amy's Ice Cream? I do hope to return in the next year or two. *LOVE Amy's Ice Cream!

Thx Pam! I am offering my ARC of DROUGHT to one lucky winner. Pam has generously offered to mail a signed bookplate for the winner!

US address only
Must be a follower
Contest ends at midnight CST, Wednesday, January 19th
Winner will be chosen using Random.org
Must fill out the form below to be officially entered
Good luck!
*Giveaway closed*
at Wednesday, January 05, 2011