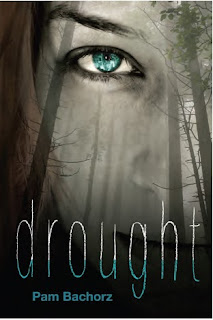 From the Publisher:
Ruby Prosser dreams of escaping the Congregation and the early-nineteenth century lifestyle that’s been practiced since the community was first enslaved.


She plots to escape the vicious Darwin West, his cruel Overseers, and the daily struggle to gather the life-prolonging Water that keeps the Congregants alive and gives Darwin his wealth and power. But if Ruby leaves, the Congregation will die without the secret ingredient that makes the Water special: her blood.


But when Ruby meets Ford, the new Overseer who seems barely older than herself, her desire for freedom is too strong. He’s sympathetic, irresistible, forbidden—and her only access to the modern world. Escape with Ford would be so simple, but can Ruby risk the terrible price, dooming the only world she’s ever known?

Review:
You would think that Ruby lives during the 1800s by the way she is treated, but DROUGHT is set in modern day America. Ruby and the rest of the Congregation are enslaved to man named Darwin West, and only live to do one thing, gather water. They scrape the water drops off every blade of grass and dewy leaf using only a spoon. Whether they have to fill a whole cup or two, this is the only life they know, day in and day out. Darwin makes their existence nearly intolerable. He is a tyrant, a brute, and abuses Ruby's mother, once the love of his life, to no end. Ruby and the rest of the Congregation believe whole-heartedly that one day their savior, Otto, will come and rescue them from their dismal existence. Like Otto, Ruby has a gift and a curse, her blood. Adding blood to the water, that they are tortured for, help her people heal and have a much longer lifespan. Her gift is kept secret, only the Elders know, and it is what binds her to the Congregation. Ruby wants to leave, walk into the forest and never look back, but her loyalty keeps her grounded. When Ruby meets an Overseer, Ford, she begins to think she can risk it all - her people - and leave her harsh world behind. Yet, this would go against everything she has ever known and she isn't sure she could leave her mother and the Congregation to Darwin and his brutality.
By no means is Drought an easy, breezy, walk in the park kind of book. It's dark, it's sad, but it's one hell of a story. I really can't compare it to anything else. I often have a hard time describing it. Although Ruby's blood is special and makes her look like a teenager even though she is 200 years old, there is no talk of magic. It's not science fiction, it's not really a Dystopia, but then again... I think around halfway I began to realize the religious undertones of the book. Ruby is under the influence of a cult. There is no God, there is only Otto. There is always, and only, Otto. There are ceremonies where the Congregation receives blood, and the Congregation constantly chant a prayer when someone is being beat. These events help fool my mind into thinking we are in the 1800s.

The relationship between Ruby and her mother was hard for me to wrap my brain around. Her mother relies on Ruby's gift to heal her from her daily beatings, and her mother relies on Ruby to be a good example for the Congregation. Ruby's mother has convinced her that they must not fight back against Darwin's authority. They are to accept what is happening and continue to pray for Otto to come. At times, this was very frustrating to read. You would think that after 200 years Ruby would have a mind of her own, but we quickly learn of the years of brainwashing. Although her mother loves Ruby very much, she has an agenda. Her mother is very manipulative, and at times I wanted Ruby to go against her, as well as Darwin. I finally get my wish, but the price Ruby pays is painstakingly high.

Ruby has no clue what goes on just past the woods. She doesn't know what kind of life is out there even if she did want to be a part of it. When Ford begins to friend Ruby, he describes his life and she doesn't understand a lot of things. Even though she is 200 years old, she has known no other life outside of gathering water. Bachorz does a fantastic job of convincing the reader that Ruby and the rest of the world are separate. I immediately was sympathetic and felt connected to Ruby, her mother, and Ford. They are all living the same dreadful life for one reason or another. Bachorz didn't go easy on any of them, and we often want Ruby and the Congregation to be rescued. I can tell you now, that doesn't happen.
Drought is captivating and I highly recommend!
4 stars!
at Wednesday, January 05, 2011