Review - Fall For Anything by Courtney Summers 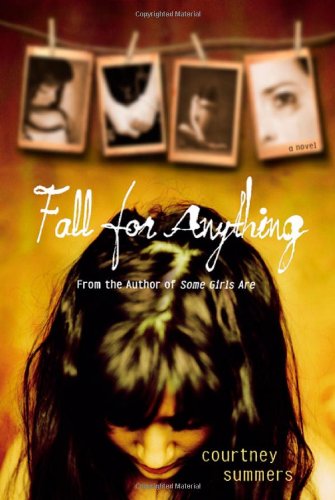 Fall For Anything by Courtney Summers
December 21st 2010 by St. Martin's Griffin

From the Publisher:
From the author of Cracked Up to Be and Some Girls Are comes a gripping story about one girl’s search for clues into the mysterious death of her father.


When Eddie Reeves’s father commits suicide her life is consumed by the nagging question of why? Why when he was a legendary photographer and a brilliant teacher? Why when he seemed to find inspiration in everything he saw? And, most important, why when he had a daughter who loved him more than anyone else in the world? When she meets Culler Evans, a former student of her father’s and a photographer himself, an instant and dangerous attraction begins. Culler seems to know more about her father than she does and could possibly hold the key to the mystery surrounding his death. But Eddie’s vulnerability has weakened her and Culler Evans is getting too close. Her need for the truth keeps her hanging on...but are some questions better left unanswered?

Review:
Eddie is in the depths of despair after her father commits suicide. She and her mother are absolutely consumed by grief. Her mother walks around in her father's old housecoat that smells like him for weeks on end. Eddie doesn't eat or sleep properly, and the two rarely talk to each other. They both walk around in a fog of depression. No matter how much time has passed, Eddie does not find a good explanation why her father killed himself. His suicide note didn't offer any insight either. Yes, he was a bit of a tormented artist, but he seemed happy when he was home. No matter how she looked at it, the unknowing part of the suicide is what tears her up the most. After her mother's best friend move in, Eddie begins spending less time at home. Eddie hangs out with her best friend Milo most of the time, but their relationship is beginning to fray at the edges. Milo's old girlfriend comes back for the summer, and Eddie finds herself jealous and even more moodier than usual. Why would she be jealous of Milo's ex, her and Milo are just friends...right? When Eddie begins to frequent the warehouse where her father killed himself, she meets a former student of her fathers, Cullen. He is older and a bit eccentric. Milo thinks he is more than just bad news, Eddie thinks he can help find out why her father jumped off the roof of a building. Together, Eddie and Cullen try to uncover the reasons why her father would take his life. What is unveiled is more than a simple explanation of a suicide.

Putting it mildly, this is one sad book. There are not enough words to convey how depressed, lost, heartbroken, and sorrowful Eddie and her mother are. Summers does an excellent job of convincing the reader that Eddie and her mother are in the lowest part of their lives. Summers paints a bleak picture of mourning and depression. She takes Eddie and her mother to the bottom of despair. It's necessary, it is what was needed to be believable. I will say, however, that although this book isn't rosy, I didn't finish it thinking I needed a double scotch. It was more than just a sad book. The last few chapters threw me for a loop. The story took a turn that I did not see coming - love it when that happens! Suddenly, we are thrown into a bit of a mystery that only leads to more questions, and a whole new heartbreak. Not everything turns out exactly okay, but you can tell that Eddie and her mother are on their way to a new beginning.

I would highly recommend this book to a young adult who is suffering because of the loss of a loved one. I think they would easily identify with Eddie's self destructive behavior. It would be wonderful for a parent to read with a young adult. I think it would spark much needed conversations about tough topics. This book could be a tool for learning how to deal with loss and learning that indeed, life moves on. Simply beautiful.