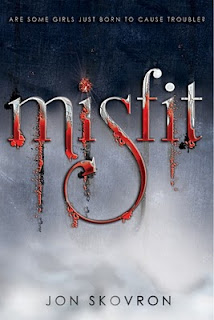 What if people told you your whole life that you were evil? How would you prove them wrong? Keep your head down, follow the rules, blend in? Jael Thompson would like to do that, but since her mother was a demon, that’s a little hard. Especially after her sixteenth birthday, when her father gives her a present that unlocks her powers and brings her face to face with her past and her parentage. Can she rise above her demonic nature and protect her loved ones from the forces of Hell? Or are some kids just born to cause trouble?

Today, Jon posted the cover of his new book, Misfit due out this summer! I am huge fan of Jon. He is hilarious and not too sore on the eyes either. *fans self* Struts and Frets was a must read for me last year. A book for boys written by a boy...gotta have it. Jon says, "The typeface was designed by Sammy Yuen and art directed by Chad Beckerman." Sammy has designed SO many YA covers, Perfect, Leviathan, The Fallen series, The Dream Catcher trilogy.... He is amazing. Check out the links above.
You can find Jon HERE and add Misfit on Goodreads HERE
at Monday, February 28, 2011