I was surprised to read that you worked for NASA for over ten years. Tell us a little about what you did.
Yes, I worked at NASA's Kennedy Space Center before I started writing full time. There, I was the head of a digital media lab. We did videos, websites, web applications, cd-roms, etc. I wrote instructional / promotional videos and developed online training. I know more about nondestructive evaluation of Shuttle and ground support equipment than I really need to know. It was a very cool job in an exceedingly cool place.

You had me at the TFC - Therapeutic Forgetting Clinic, where did this idea originate?

I was reading about some experiments in the field of Post Traumatic Stress Disorder (PTSD). Researchers are testing certain already available drugs to see if they lessen the stranglehold traumatic memories have on sufferers. (Some do, btw.) Then I had this vision of a Starbucks / frozen yogurt kind of place on every corner that dispensed the pill. Then I asked myself what kind of world would have them--and who would be the least likely character to spit out the pill.

Nora's family has a dirty little secret that changes each member in a different way. Who do you think is affected more?
That's a tough question. I won't give away the secret, but each family member is affected differently. It's the
catalyst for Nora's change, but this secret has ruled her mother's life for so long--and not in a good way.

What was the decision behind making this story from all three friends perspectives and not just Nora?
In the first draft, I told the story just from Nora's point of view. However, it felt incomplete--and her perspective on the world was still a bit limited even at the end. Introducing Micah and Winter's points of view let me play with the idea that everything isn't what it seems. And I like the idea of the readers getting three
different perspectives and then they can put it all together themselves.

When you were in the early stages of developing Nora's character, did you have someone in mind? Family member? Actress?
Yes and no. Overall Nora isn't based on particular person; she's kind of an every girl. But, her secret (really her mom's) was inspired by someone I know. (It's not me or my mom, but I'd rather not give that person's identity away.)

What is your proudest literary moment?
Getting the letter from the publisher saying they wanted to buy Memento Nora!

How will you celebrate NORA's release day?
Hopefully, I'll have a nice little party / signing --and then maybe take my family and friends out for something really good to eat. 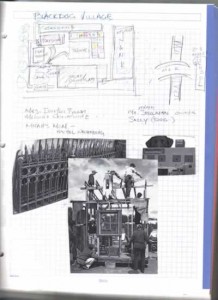 "I’m not normally an artsy-craftsy girl, and I can’t really draw. But, I have hit upon a crafty way that helps me visualize the characters and elements of my novel(s). "
Thank you, Angie! Personally, I can't wait for MN #2!
Check out my review of Memento Nora HERE


One lucky winner will win my ARC of Memento Nora and several more people will win signed Memento Nora bookmarks!
Contest rules:
US & CAN for the ARC & International for bookmarks
Must be 13+

Must be a follower
Contest ends at midnight CST, Wednsday, March 9th
Winner will be chosen using Random.org
Must fill out the form below to be officially entered
Good luck!
*Giveaway closed*