I am very happy to have Holly Schindler on the blog today! I have been running a tour of Playing Hurt for a couple of weeks, and am excited for the book to come back to me so I can read. It has been wonderful reading positive reviews. 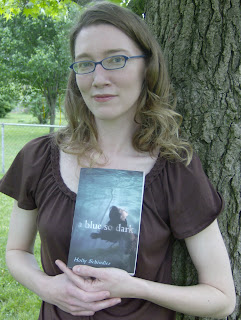 Writing and music have always been a constant in your life.  How do the two arts play off each other—or do they?
I keep really long hours writing.  Especially times—like now—when I’m on one of my crazy-writes (I’m trying to get an adult novel wrapped up in three weeks, which involves intensive writing for ten to twelve solid hours a day).  Music is my “refresh” button.  When I get really weighed down, I can take a ten-minute music break and be back in the game…

You started writing PLAYING HURT before your first published book, A BLUE SO DARK.  What was it about BLUE that made the cut before PH?
From the get-go, BLUE got a different kind of attention from agents and editors.  Initially, I wrote BLUE for a writing contest aimed at authors who had not yet published a YA novel.  I didn’t win, obviously, but I did get the manuscript returned with a note telling me that the book had great potential.  After that, I really kind of focused the bulk of my energies on that book.  I just got it in my head at that point that BLUE would probably be my first published novel.  I went through about four rounds of revision and resubmitting—and I did work on other books—but BLUE got the heaviest dose of my attention, which probably accounted for it selling first.

What came first for PH: plot, setting, or character?
Both of my books—BLUE and PLAYING HURT—began with a scenario: with PLAYING HURT, I wanted to write a book about learning the difference between loving someone and truly being IN love with someone.  The sports subplot came about much, much later—about five years or so after completing the first draft.

Chelsea and Clint have a connection that is undeniable even though Chelsea has a boyfriend at home.  Cheating is a topic that teens face often (hormones and all), but how do you deal with the naysayers that wish Chelsea broke it off with Gabe first?
I love the fact that the cheating aspect has spurred so much debate and conversation.  I felt, when I drafted the book, that in order to illustrate the difference between loving someone and being truly IN love, Chelsea needed to be involved with someone back home, so she’d have something to compare to how she feels about Clint…

Had Clint moved to Missouri , and gone to college with Gabe and Chelsea, I do think Chelsea is the kind of girl who would have broken things off with Gabe first.  But remember, Chelsea ’s on a three-week vacation.  Do I think it’d be realistic for Chelsea to break-up long-distance to spend time with someone she will only be able to see less than one month?  No way.

But I really do think that in all honesty, the “casual” sex would be for Chelsea to have sex with Gabe at the Carlyle when her heart is not really in it.  (Though her relationship with Clint is destined to be short lived, it’s more meaningful to Chelsea .)  Chelsea has a physical relationship when it means something—not merely because it’s just something you’re supposed to do when you’re involved with someone.

What is one question that you wish you were asked in an interview, but have never been asked?
In all honesty, bloggers are so smart and insightful, I can’t think of a single thing right off the bat that I wish I’d been asked…Bloggers are just incredible—incredible!  I love the way they respond so passionately to literature…

Can you offer a little inside scoop about the cover art of your books?
Actually, both of those covers feature stock photos…The texture of the covers was a surprise to me.  The ARCs had a real slick feel—like most paperbacks.  That raw-silk feel was a bit of a shock…I really love that feel, though…In this digital age, I love that so much attention was paid to the way the books would feel in readers’ hands.

What have been a few of your favorite reads of 2011 so far?
I did enjoy THE NIGHTMARYS and JUMPSTART THE WORLD.

Now for some silly ones:

As a writer, are you part of the Grammar Police?
After you’ve gone through the copyediting process a couple of times, you get REALLY sensitive to little mistakes—even in published books!

What is your favorite writing snack?
Coffee and donuts.

What are you working on right now?
An adult novel—can’t wait to get it finished!

Any Texas tour stops this year?
My traveling’s pretty limited right now…However, anyone who’d like to get a signed bookplate for their copy of PLAYING HURT or A BLUE SO DARK should email me at writehollyschindler (at) yahoo (dot) com!