I'll say it just one more time in case you don't already know, I am a fan of Andrew Smith. Can someone get that printed on a shirt? His books are some of the most "real" reads you will ever get in YA. Raw, edgy, authentic.....downright bad ass. So today, I am pleased ecstatic to have Andrew on the blog today!


Writing is your full-time job. What else does the profession mean to you?
I could write a book to answer that question. Let's see... Writing as a profession also means having this most amazing opportunity to connect with people whose lives include books and reading: Teachers, librarians, booksellers, students, and others in the publishing industry. Writing as a profession also allows me access into the arena as an advocate for something I feel so strongly about: Literacy, the bias against boys when it comes to reading, writing, and creative pursuits; and the attack on creative intellect being waged by the standardization mills of public education. People listen to me just a little bit more because of the whole "professional author" thing, I guess. But the profession of writing also means an awful lot of sadness, too. You will just have to trust me on that. 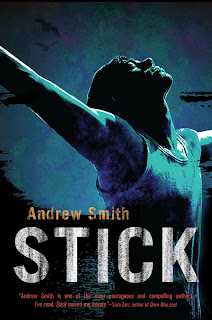 How long has the story of Stick been with you?
Honestly, the story was in my mind for some time. During Teen Read Week in 2009, I started looking at books and poetry that kids were reading and I became fascinated by certain tracts of words that I'd seen -- like they were written with an intentional meter and timing to them. I was probably wrong, but that's when I started thinking about the opening chapter of this book.

I also believe that all my stories have always been inside my head. It's just a matter of timing that they dictate to me when they will come out.

I read that you wrote STICK during NaNoWriMo back in 2009. Admirable! Are you diving in this year?
Well, yes... I did write Stick during NaNoWriMo 2009, but only because it just kind of happened that way. I did not upload my work onto the NaNo site. I could never do that. But I did keep in touch with others who were participating, and I did also get to the 50,000 word mark before the month was over. I ended up finishing Stick about 2 weeks into December, though. It is quite a bit longer than 50,000 words. All told, it took me about 6 weeks to write.

And I truly hope to NOT be writing in November of this year. I have been working on a string of novels, uninterrupted, since I wrote The Marbury Lens. I just this week finished a new - as yet unheard of - novel that came in at 105,000 words. I am tired.

You have told me before that you learned your older brother was gay when you were a kid. Is that why STICK is set in the mid 1970s? To keep the story more authentic?
Yes, well... there are a lot of things about Stick that were true to my childhood.

Books written for young adults that contain gay characters seem to have a target on them. I'll pretend I don't know and ask what your opinion is on the matter.
Sometimes people make a big deal out of the concept of "targets." So I am not really certain if there are books which have been targeted because they portray gay characters, or for some other reason. I only know that in my experience as a writer, I have written now several books with gay and bisexual characters and not one professional in the publishing industry has ever pointed any criticism or concern my way. The reality is that GLBTQ people -- young and old -- are everywhere, in schools, churches, grocery stores, and living next door to us. If the sexual orientation of anyone (whether they are REAL PEOPLE or fictional characters) becomes the sole defining aspect of their personality, then they are shallow and uninteresting... I wouldn't want to spend much time with anyone like that, much less put them in a book.

Can you tell us what Stick and Bosten are up to now that it's 2011?
Hmmm... I will admit that I wrote an additional section of the novel STICK in which Stark McClellan is a student at UCLA and he tells about what happened to him, Bosten, Dahlia, Emily, and Kim. I decided not to put that chapter into the book because I felt that readers got a good enough sense about where those characters' lives were heading.

I have to ask, how is The Marbury Lens #2: Passenger coming along? Your fans, including me, are chomping at the bit!
Well, the novel is completed. I will say that much. It also turns a bunch of stuff completely upside down. So I will say that readers and fans of Marbury should brace themselves for the unexpected... But what else would you expect, anyway?

Who do I need to beg to in order for you to make your way to Texas?
The people at Macmillan have always been so considerate in sending me around the country. I am sure that Texas is going to have a turn someday. But if I get invited to participate at TLA next spring, I will make it happen, one way or another. How's that sound?

Thank you, Andrew! I'll be sure to beg Macmillan....

Add to Goodreads
You can find Andrew on his blog and Twitter
The folks at Macmillan are kind enough to offer up one brand new finished copy of STICK to one lucky reader! #everyonesaythankyou

Fill out the doo-hickey to be officially entered.

**IF YOU ARE NOT ABLE TO VIEW FORM, PLEASE CLICK TITLE OF THIS POST AND IT WILL APPEAR #magic